I’ve recently reissued my first novel, To The Fair Land, with a new cover. Set in the eighteenth century during the Age of Sail, it tells the story of struggling writer Ben Dearlove’s quest to discover the anonymous author of a best-selling book about a fictitious voyage to the South Seas. Far from engaging in a genteel literary pursuit, Ben finds himself up against some ruthless people who will lie, steal and even kill to stop him.

Both the British Royal and merchant navies were all-male preserves. However, female sailors were not unknown in the Age of Sail. Wives accompanied their husbands in Nelson’s warships. They helped to tend the sick, and during battles carried powder to the guns or looked after the wounded. Officially, though, they were not part of the ship’s muster, and so they were not paid or provisioned.

Some women didn’t travel as wives. There are many stirring tales of women who disguised themselves as men in order to go to sea. Tales of women like “Pretty Susan” who served on board a man o’war, or Young Henry of the Raging Main, who was a woman called Emma, were popular subjects for ballads and sea shanties. Real ‘Pretty Susans’ include Marine William Prothero who served on board the appropriately named Amazon in 1760 for five months before anyone found out he was a she. A black sailor called William Brown joined the Navy in 1804 and served until 1815, when she was captain of the foretop (the upper part of the foremast). Tom Bowling was a boatswain’s mate on a war ship for twenty years, and continued to dress as a man after she was pensioned off.

People like a good romance and so the idea that many of these female tars went to sea to be with a lover are popular. There were other reasons though. Poverty and destitution are powerful motivators, and the lure of prize money could appeal to a woman just as much as to a man. Escaping domestic tyranny or abuse might also seem attractive: William Brown wanted to get away from her husband. A taste for adventure, independence, seeing the world, or simply escaping the narrow feminine sphere were other possible motives.

There are also swashbuckling tales of female pirates. Helen Hollick, author of the Sea Witch Voyages about the adventures of Captain Jesamiah Acorne and his piratical crew, wrote an article for this blog about Anne Bonny and Mary Read. You can read about them here.


What about the female circumnavigatrix? Two women are referred to in To The Fair Land, a nearly-navigatrix and a woman who did manage to travel around the world, though it was some years before she could complete her voyage. Alex Edgcumbe, one of the characters in To The Fair Land, tells the story of the first:-

“Three weeks after leaving Plymouth, [Captain] Cook arrived in Madeira. Here he learned that he had just missed a botanist called Burnett who had been waiting for [botanist] Mr Banks, having been appointed some time previously as his assistant. Burnett had passed the time as any good botanist should, gathering flowers, but when the news that Banks was not sailing with Cook reached the island, he had hurriedly taken a berth on the first vessel home. When the Resolution anchored in Funchal three days later, the place was still chuckling over the exploits of this Mr Burnett, who was so obviously Mrs Burnett.”

(To The Fair Land)

In the event, neither Joseph Banks nor the ‘Mrs Burnett’ he had attempted to smuggle onto Cook’s second voyage (1772-1775) travelled with Cook.

Jeanne Baret (1740-1807) was more successful in her bid to sail the globe . Between 1766 and 1769 the French mounted an expedition to the Pacific under the leadership of Louis Antoine de Bougainville (1729-1811). As Jean Baret and in male disguise, she travelled as assistant and valet to botanist Philibert Commerson on the Étoile, sharing his cabin. The two had previously lived together in Paris, where their baby had died shortly after birth.

In some versions of her story it was not passion for Commerson but passion for botany which led to her taking the place on the Étoile, Jeanne having been trained as a herbalist by her parents. She told de Bougainville, however, that she had assumed her male disguise to avoid poverty and, dressed as a man, had worked as a valet before she met Commerson. This is “doubtful” according to Professor John Dunmore in his introduction to The Pacific Journal of Louise-Antoine de Bougainville 1767-1768, though why he does not say. Others suggest that she was lying to protect Commerson, who she claimed did not know she was a woman.

The circumstances of her exposure are not clear either. Rumours about the beardless Baret soon circulated on the Étoile, which may or may not have been communicated to de Bougainville in the Boudeuse. Subsequently she is said to have been recognised as a woman by a group of Tahitians who attempted to rape her. Alternatively, the Tahitians suspected she was a woman and tried to strip her to find out if they were right. In some accounts, when the French sailors discovered she was a woman they also attempted to rape her, and according to others, they succeeded. What all these stories have in common are titillating hints and salacious detail, and Jeanne’s voicing of her own experiences is lost.


When Jeanne’s sex was discovered, she and Commerson were put ashore at the Isle de France and so did not complete the voyage with de Bougainville. A few weeks after Commerson’s death, Jeanne opened a bar, married an ex-soldier, and later went back to France with him, finally completing her circumnavigation.

De Bougainville clearly respected Jeanne, noting in his journal for 28/29 May 1768, “I admire her determination…[and] I have taken steps to ensure that she suffers no unpleasantness”. He was optimistic that the court would forgive her breach of Naval law, and she was in fact awarded a seaman’s pension after her return to France. After all, de Bougainville commented, it was unlikely that anyone else would follow her example. He added, “She is neither ugly nor pretty and is not yet 25”.

More research has been carried out into Baret’s life and work, and her contribution to botany is now more widely recognised. John Dunmore has written a biography of her, which I have not read, but will certainly be looking out for, as well as a couple of other titles I came across when I was researching this blog (see Further Reading). Neither ugly nor pretty Jeanne Baret is certainly a woman I’d like to know more about!

Glynis Ridley, The Discovery of Jeanne Baret: A Story of Science, the High Seas, and the First Woman to Circumnavigate the Globe (2010)

Danielle Clode, In Search of the Woman who Sailed the World (2020) 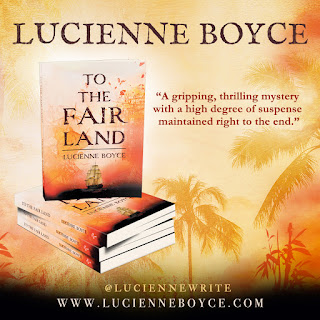 To The Fair Land is available in paperback and ebook (Kindle, Nook, Kobo, AppleBooks. For buying links see https://www.lucienneboyce.com/to-the-fair-land/