I've picked out two very different books from the titles I read this month. First is Suzie Grogan's beautiful study of the poet Keats: John Keats: Poetry, Life and Landscapes. It's followed by Conn Iggulden's robust historical novel,Wars of the Roses: Stormbird.

In her book, John Keats: Poetry, Life and Landscapes, Suzie Grogan writes, “I would always advise even the most cynical person to find a poet who speaks to them as Keats does to me”. As far as Suzie Grogan is concerned, poetry is for everyone, and for everyone there will be a poet who speaks to them. This principle informs every page of her exploration of the poet who, since she was twelve, has accompanied her “through both good and very bad times”. 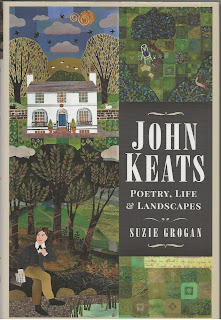 The book reflects a relationship that is intensely personal: the author shares her experiences of following in Keats’s footsteps in Hampstead, Oxford, the Isle of Wight and elsewhere; her responses to his poetry; and its influence on her life. It is also well-informed, containing numerous references to scholarly and biographical work on Keats. It includes useful biographical information, pen portraits of family, friends and lovers, and some of his poems. The style is direct, honest and unpretentious, as well as a no-nonsense rejection of the stereotypical image of Keats as the frail, sickly romantic.

I’m a writer who finds a lot of my inspiration from visiting places in search of the people of the past, and I’ve often reflected on the difficulties and ironies that involves as well as the pleasure and inspiration. So I found Suzie Grogan’s descriptions of her walks particularly resonated with me. They are often elegiac, referring both to the impossibility of seeing something quite as people of the past saw them – they cannot have the same impact on us, or we “pass by at speed landmarks that once caused such sharp intakes of breath”.  But they also refer to the wanton or careless destruction of their former beauty, the busy roads and holiday homes which obscure and blight places Keats saw in their wild glory. Even so, for all the sadness this might evoke, we are reminded of the joyful power of the imagination, of how our “internal landscape” is what informs our responses.

Reading Suzie Grogan’s book, I reflected on how I’ve got out of the habit of reading poetry, and though I used to go to a lot of poetry readings I stopped doing that years ago too. And here’s a dreadful confession: after a while I just found a lot of it irritating. So many of the poems failed to satisfy: little explorations of little moments in a few little lines – which is funny, isn’t it, because that’s an echo of a poem itself. It’s from John Clare’s anti-enclosure poem The Mores, in which he castigates the division of common land into “little parcels little minds to please”. I love that poem.

And that reminded me that actually I do have poets who speak to me. Clare is one of them, William Morris another. And now, I realise, so is John Keats. Perhaps even this old cynic can blow the dust off her poetry books and start reading and enjoying them again. “I believe…there is a poet out there for everyone”, writes Suzie Grogan, and in this lovely book she shows us how true this is.

Conn Iggulden’s Wars of the Roses: Stormbird is epic in its length, as well as in the number and variety of characters, who range from King Henry VI, his lords and ladies (but not too many of these) to English archers and Jack Cade and his rebels. It is told in a fairly traditional way, incorporating a number of settings and using multiple points of view. There’s also a lot of what are called Telling Details (food, armour, archery, fights), and those features so beloved of historical fiction critics – the Sights, Sounds and Smells (lots of these) of the era.

I don’t know anything about this period but I didn’t need to, as Iggulden provides a clear enough historical framework for me to follow the plot. Whether the history is accurate or not I leave to others to debate. Iggulden’s interpretation was certainly enough to shape the novel, and it’s only from other reviews that I found out the character of the spymaster, Derry Brewer, is fictitious, so that it follows that many of the events (or elements of them) he is involved in are also fictitious. I don’t think that’s a weakness; it is fiction after all, and if I want to know the history I’ll read history books.

Some things about the plot puzzled me, though. Why was the prologue about the death of Edward III sixty six years before the novel opened? It seemed to have no bearing on the story. Perhaps those who are knowledgeable about the period understood it.

The characters are all very well realised and vivid, if at times a little one-dimensional. The villainous Richard of York and his revolting wife, Cecily, for example, who are given to standing on battlements chuckling at the suffering of others; honourable, doughty and none too sharp William de la Pole, Duke of Suffolk; or the saintly Margaret of Anjou, so innocent and sweet and girlish yet at the same time so strong and intelligent and authoritative. I can’t remember if her eyes ever flash but I wouldn’t be surprised.

One thing the characters all have in common is that they inhabit a truly horrible world. It’s a world of unspeakable brutality: torture, battle, rape, hunger, eviction, starvation, robbery, murder...No one is safe; the king himself has to run for safety as Jack Cade’s butcherous downtrodden masses approach London waving a sheriff’s head on a pole. No one is blameless either: everyone, low or high, hurts or takes advantage of someone.


Iggulden certainly isn’t coy about the violence. At times I wished he had been, but then I suppose you could argue that these things did happen, and it is the historical novelist’s job to acknowledge them. If torture was a fact of life, then perhaps your characters have to reflect that. Or perhaps it’s all a question of perspective, of which parts of the history the author chooses to emphasise. At any rate, it is the world Iggulden’s characters inhabit, and it is a well realised if blood-spattered one.

Stormbird is, as I said, an epic novel, and it’s only the first in the series. Its episodic structure makes it easy to read, and there’s plenty of excitement and tension in the fight and battle scenes as well as in the more personal concerns of the characters. It is fast paced, partly because of the constantly changing locations and points of view, though this did also have a distancing effect. I found it harder to engage with any of the characters or feel that they were fully developed, but that’s not unusual in a book with such a huge cast. The book’s themes are very much what are usually regarded as masculine – battles, political intrigue, men jostling for power, and women with not very much to do unless they are the Power Behind the Throne. I wouldn’t call it subtle, but it is a page turner.