In The Road to Representation: Essays on the Women’s Suffrage Campaign, I wrote a piece about how businesses made money from the suffrage campaign (Making Money From the Suffragettes). In it I mentioned how for some companies, the campaign was a fruitful marketing opportunity. I also referred to an advert produced by The Keeloma Dairy Company.

So I was amused when I recently bought a copy of an advertisement by another dairy company which also used women’s suffrage in its marketing campaign. The company was Aplin & Barrett and the advertisement was for their St Ivel brand. Such was their faith in their product, they claimed it could even win women the vote. 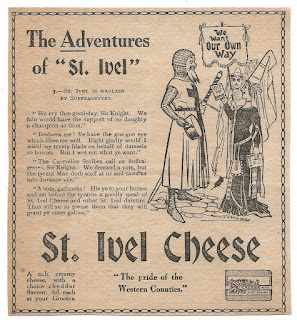 In this adventure, the knight St Ivel meets a group of suffragettes, who ask him for his support.
"Beshrew me!" he replies, "Ye have the goo-goo eye which likes me well. Right gladly would I wield my trusty blade on behalf of damsels so buxom. But I wot not what ye want." The women explain, "We demand a vote, but the tyrant Man doth scoff at us and casts us into durance vile." St Ivel advises them, "Hie ye to your homes and set before the tyrants a goodly meal of St Ivel Cheese and other St Ivel dainties. Thus will ye so please them that they will grant ye votes galore."

The cartoon was drawn by the commercial artist Alexander (Alick) P F Ritchie (1868–1938), some of whose work is held at the British Cartoons Archive at the University of Kent. Ritchie was born in Dundee, and studied at the Ecole des Beaux Arts in Antwerp. You can see some wonderful examples of his work on the National Portrait Gallery website.

You can even see the artist in action in this brilliant 1915 film on the British Film Institute website, where he is doing a version of the music-hall act the “chalk-talk”.

The St Ivel brand was established in 1901 by dairy wholesalers James Shorland Aplin and William Henry Barrett who formed Aplin & Barrett Ltd in 1897 (they had gone into partnership in 1888). The company was based in Yeovil, and amalgamated with Western Counties Creameries in 1898. For more information see The A-to-Zof Yeovil’s History. There are more examples of Aplin & Barrett’s advertising on the website, along with photographs of promotional items such as cups, playing cards and notepads – reminiscent of the WSPU’s own talent for producing Votes for Women merchandise. There are also some examples at The History of Advertising Trust website. Sadly there are no more suffrage adverts!

You can find out more about Alick P F Ritchie at A History of British Animation.

Making Money From the Suffragettes was originally published on my blog in July 2016.

The Road to Representation: Essays on the Women’s Suffrage Campaign is available to new subscribers to my newsletter as a free ebook. You can sign up here.

Note re image: My copy of the image does not include details of the publication it appeared in or the date it appeared, nor do I have any information about the commissioner, which I assume was Aplin & Barrett, or any agreement made concerning copyright. The firm was taken over by Unigate in 1960 and so far as I know no longer exists. Therefore, so far as I can ascertain, based on the date of death of the artist, and assuming copyright remained with the artist, to the best of my knowledge the image is not in copyright.

Posted by Lucienne Boyce at 2:27 PM No comments: