I'm delighted to welcome self-confessed 'Roman Nut' Alison Morton to my blog today. Alison is the author of the stunning Roma Nova series - you can find out more about the books below.

Heroines don't come much feistier than Alison's protagonists - but what makes a feisty heroine? And can you have a feisty hero?


‘Tough’, ‘feisty’, ‘kick-ass’ – clichés, ironic words or signposts? And, provocative question, would you apply them to men? Perhaps the first one and possibly the third, but I can’t remember reading about a ‘feisty hero’.  But what is a tough heroine?

Boudica, queen of the British Iceni tribe who led an uprising against the occupying forces of the Roman Empire?

Jane Eyre, whose strength of will and character drive her to survive challenges in her life?

Cloelia, a Roman who led the daring escape of hostages from Lars Porsena c 508 BC?

So how do you write a tough heroine?

The biggest challenge is plausibility. A completely accomplished all-singing, all-dancing toughie doesn’t work. Yes, this kind of operator needs to be strong, skilled and savvy, but her life will be much more than that. And she’s unlikely to have been born like that, unless genetically altered in a future far, far away. Even Hanna (2011), the sixteen-year-old girl who was raised by her father to be the perfect assassin, started as a ‘standard’ child.

Readers need to see where a heroine came from, what turned her from an ordinary girl into the book’s heroine. Usually she passes through a formative traumatic event but writers need to give hints about resilience, integrity and an ability to develop confidence as well as physical abilities. Undoubtedly, a strong female character has to have an equally strong will and a passion to drive through what she believes in.

In my first Roma Nova thriller, Inceptio, Karen starts off as an office worker, but we see from the first page that she’s prepared to stand her ground against people doing wrong, even knocking them to the ground when they attack her. Within the first chapters we know she goes to the gym, we’re with her when she jogs in the park; she’s outdoorsy and sporty. Her disrupted childhood with a barren and loveless adolescence has made her learn to protect herself emotionally and question everything. She demonstrates signs of mental and physical toughness and resilience, even when living in a ‘normal’ existence, to the level of not feeling completely at ease in her own skin. So when she becomes an undercover operative, she already has many latent characteristics required.

Beware of bunny rabbits and kittens…

The second challenge is not falling into the trap of making a strong character have moments of unbelievable weakness. Doubt, a temper, love for movies, joking with colleagues, buying gifts for friends rounds out a character, but writers must not go too far into fluffy-bunny-land and over-compensate for the toughness. That risks slotting her back into the ‘caring soft female’ stereotype.

A military woman will drink and swear – it’s the pressure of the job – but she will have the normal emotions of any other woman, although expressed differently. Under pressure, Karen/Carina often feels aggressive towards people who have hurt her family, friends or colleagues, but it’s her way of showing she cares. Other times she finds everything too much and we see tears and fears. But her habit of picking herself up and facing up to what has to be done has been her way of coping since the death of her parents.

Now, the cliché of tough male hero leading the action and loyal, supportive heroine tagging along or carrying out secondary tasks is being challenged, but slowly. The Bechdel test, developed since its origin in 1985, asks whether a work of fiction features at least two named women who talk to each other about something other than a man. Many contemporary works fail this basic test of gender bias.

So in an age still stumbling towards equality, it’s a good test to apply to one’s own writing. Are the women instrumental in pushing the story forward? Do they make decisions at the critical points in a novel? Historical writing should always be in context; societal dynamics of history cannot be altered by parachuting in a 21st century feisty young miss against the norms of the period and locality even when writing in subgenres such as historical fantasy or alternative history.

Writers write in the context of their own societal mores; we can't help it, that's what we are immersed in from babyhood. I remember the rather twee Ladybird history books of the 1960s; by today's standards condescending, sexist and paternalistic, but at the time perfectly normal. Writing the same children's history books now a historian would, I hope, take a startlingly different point of view. Maybe today we still can't have feisty Roman empresses ruling openly, but we can explore the sources containing information about them and their influences with a more open mind-set. Berenice, the queen of Judea, and Livia Drusilla, the wife of Augustus, would be splendid examples of women of power to investigate.

In our modern historic fiction, we can transfer this openness into our stories and make connections between women characters unknown from the sources. Women acting together can become agents in the plot rather than the token 'love interest' or mother/daughter/sister of the male protagonist.

In my alternate history thrillers, I’ve taken this much further and developed a society descended from Roman dissidents where women rule, but men are not disadvantaged. You can read the whole story here,  but Roma Nova’s first few hundred years were unstable and dangerous so daughters as well as sons had to put on armour and carry weapons to defend their homeland and their way of life. Fighting danger side-by-side with brothers and fathers reinforced women’s status and roles. And they never allowed the incursion of monotheistic paternalistic religions. So it’s reasonably logical that in this context women developed leadership roles in all parts of Roma Novan life over the following centuries.

In the present day, my female protagonist’s story in Inceptio begins in a standard Western society. When she is compelled to flee to her dead mother’s homeland in Europe, Roma Nova, she finds the Roman-infused culture unnerving, but in a strange way liberating. Other strong female characters surround her; her grandmother, cousin, female colleagues and friends all drive the action. The ‘love interest’ is male and an integral part of the story, unlike many female love interests in standard historical thrillers.

Holding an alternate historical mirror up to the standard timeline produces very interesting reflections. As I write, I try to ensure that my heroine and other 'active women' are driving the story, but sometimes when I read through what I've written I see I may have fallen into the cliche hero/heroine placements. I then switch the gender of the speakers in the dialogue and/or the actors in the scene. I give this the rather grand name of 'gender mirroring'; this technique clarifies the roles wonderfully. 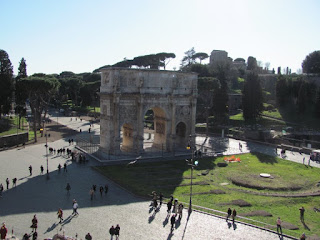 The natural view of women's and men's status and roles in my imaginary Roma Nova is not oriented around how people see things in most of the rest of the world - the often unconscious 'male gaze'. In Roma Nova, men are not disadvantaged - they are just equal. Not only does this throw up delicious conflict when my characters interact with nationals from other countries, it piques the reader's interest and starts them thinking about the gender roles in our real timeline. Of course, it's an optimistic view, but as we see in Roma Nova, perfectly possible.

Alison Morton writes Roman-themed alternate history thrillers with strong heroines. She grabbed a first degree in French, German and Economics in the mid-70s and went ‘back to school’ for an MA in history thirty years later.

A ‘Roman nut’ since age eleven, she has clambered over sites throughout Europe including the alma mater, Rome. But the mosaic pavements in Ampurias (Spain) started her wondering what a modern society based on Roman values would be like if run by strong women…

All four Roma Nova thrillers  – Inceptio, Perfiditas, Successio and Aurelia – have been honoured with the BRAG Medallion, an award for independent fiction that rejects 90% of its applicants. The first two were finalists in Writing Magazine’s 2014 Self-Published Book of the Year Award and the last two selected as Historical Novel Society’s Indie Editor’s Choices and longlisted for the HNS Annual Indie Award in 2015 and 2016 respectively. Aurelia has now been shortlisted. Alison’s third book, Successio, was featured as Editor’s Choice in The Bookseller’s inaugural Indie Preview, December 2014.

And here’s what Alison’s latest book, Aurelia, is about:

Late 1960s Roma Nova, the last Roman colony that has survived into the 20th century. Aurelia Mitela is alone – her partner gone, her child sickly and her mother dead. Forced in her mid-twenties to give up her beloved career as a Praetorian officer, she is struggling to manage an extended family tribe, businesses and senatorial political life.
But her country needs her unique skills. Somebody is smuggling silver – Roma Nova’s lifeblood – on an industrial scale. Sent to Berlin to investigate, she encounters the mysterious and attractive Miklós, a suspected smuggler, and Caius Tellus, a Roma Novan she has despised and feared since childhood.

Aurelia suspects that the silver smuggling hides a deeper conspiracy and follows a lead into the Berlin criminal underworld. Barely escaping a trap set by a gang boss intent on terminating her, she realises that her old enemy is at the heart of all her troubles. She pursues him back home to Roma Nova desperate now he has struck at her most vulnerable point – her young daughter.

You can watch the book trailer here:  https://youtu.be/K5_hXzg0JWA

Do you have a favourite feisty heroine? Use the comments box below to tell us who she is - and why you chose her - or to share your thoughts on Alison's blog!