I’m an inveterate English Heritage blue-plaque spotter – and if I’d missed this one in Panton Street, Haymarket, London, the pub sign would have been enough to tell me that I was standing outside the home of Bristol pugilistic champion Tom Cribb (1781-1848). 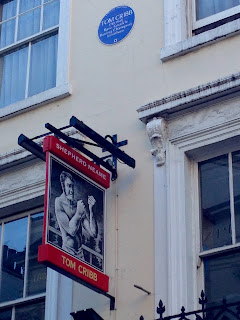 Cribb was born in Hanham but moved to London when he was a boy. He went on to work as a bellhanger, then a coal porter – which job earned him the nickname The Black Diamond. He later joined the Navy. His first fight was a seventy-six round bout against George Maddox in 1805. His only defeat was against George Nicholls in the same year.

Cribb then trained under the famous sportsman and pedestrianist Captain Barclay, who prepared him for his 1807 fight against the reigning champion of England, Bristolian Jem Belcher. After his defeat, Belcher demanded a rematch, which took place in 1809 with the same result. (You can read more about Jem Belcher and other pugilists who are mentioned in Bloodie Bones: A Dan Foster Mystery on the Dan Foster’sWorld webpage).

Cribb fought the black American pugilist Tom Molineaux in 1810. During the forty-round fight, the former slave was treated to a barrage of racist abuse from the crowd. The spectators also demonstrated their partiality in a practical way when two hundred of them stormed the ring to drag Molineaux off Cribb, who he had trapped against the ropes. In the twenty-eighth round Cribb was knocked down but was given time to recover by the delaying tactics of his seconds who falsely accused Molineaux of hiding lead weights in his fists. Molineaux demanded a rematch, which took place in 1811; the American ended up the loser with a fractured jaw. On his return to London, Cribb was cheered through the streets. He was presented with a silver cup celebrating his victories, on which was engraved the Bristol coat of arms and a motto from Macbeth: “And damn’d be he who first cries, Hold! Enough!”

Cribb, like many pugilists, became a publican when he left the ring. He ran the Golden Lion in Southwark, then the King’s Arms on Duke Street, and finally the Union Arms on Panton Street – now called The Tom Cribb. The pub – known as Cribb’s Parlour – was a popular haunt with the Fancy (prize fighters and their fans), Lord Byron amongst them.

Cribb was the unchallenged champion of England between 1811 and 1821, after which he was allowed to retain the title of champion until he died. He was one of the prize fighters who guarded the entrance to Westminster Hall during George IV’s coronation. Thereafter things began to fall apart: after suffering heavy gambling losses he lost The Union Arms. His last years were spent living off the generosity of friends and admirers, and he died in his son’s house in 1848.

You can preview Bloodie Bones: A Dan Foster Mystery here.