On Gender, Writing, and Not Being Published

I’ve just read On Gender and Writing, a selection of essays edited by Michelene Wandor published in 1983. It was a fascinating look back at the 1980s, the era of Spare Rib, of the Gay Liberation Front, of earnest fiddling with language to incorporate male and female – the awkward “he or she” and “s/he”. The book (discovered in an Amnesty International bookshop) even smells of the 80s with its aroma of yellowing pages and bleached cover.

One essay in particular struck me: An Excerpt From My Unpublished Writing by Nora Bartlett. In this essay, Bartlett describes how when she started writing she had no idea that she would remain unpublished: “I didn’t set out to become an unpublished writer, it just happened”. Writing her first novel, she never even thought about being published – because it didn’t occur to her that she would not be. This was not because she had a huge ego or a sense of entitlement: you only have to read her essay to be certain of that. She genuinely believed that the writing was the hardest part. 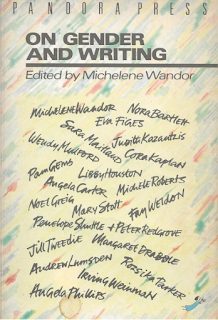 The rejections came as a tremendous shock. And they hurt. They robbed her of her confidence. She protected herself by developing a “comic public persona about being an unpublished writer”. But it wasn’t long before this false self caused her terrible harm. She began to think the work itself was comic. Then it wasn’t comic any more. It was pathetic and contemptible, and so was she. Writing became mixed up with shame, misery and self-doubt. How could any artist survive this?

The essay chimed with so many of my own experiences. I remember how I started on my first novel with the same idea that it was really all about the writing. I too had a shock when the rejections started coming. It was compounded by the fact that agents and publishers often told me they liked the work, pointed out its good points, suggested improvements. Reading Bartlett’s essay, I recalled the telephone conversations and meetings with agents who seemed on the brink of taking me on, but who, at what seemed the last minute, declined – regretfully, encouragingly. Send us your next book. I was grateful they took the trouble, truly I was, but at the same time their comments puzzled me. If the work was good, why didn’t they represent or publish it?

Like Bartlett, I suffered from what she called a “weird innocence”. This was partly due to my inexperience – not only of the publishing industry, but of the world in general. It seems incredible now, but in those days it wasn’t so easy to find out how publishing works. There was no internet with gazillions of websites and blogs on every aspect of the business from  how to write a novel, approach agents and assess a publishing contract to marketing your book. Indeed, authors then didn’t seem to be called on to do much more than turn up for a few bookshop events organised and paid for by someone else – swanning around with a glass of wine in one hand while signing books with the other seemed very attractive. So there was that practical difference, that more limited access to the knowledge and tools you need to be an author.

But tied up with that “weird innocence” was the sense that publishing was a small, tightly-knit world, and that places in it were limited. There were, after all, only so many publishing companies, so many literary agencies, so many printing presses, so many distributors. How often did an agent say (and still say) “my list is full” or “I’ve got enough stories about seventeenth-century detectives”. It’s simply a matter of practicalities. In the same way, it follows that the number of books that the market could realistically stand was limited too. They had to be drip fed throughout what was called the “publishing year”. What’s more, it took a long time to get a book out. It could be a year or more after signing a contract before a book appeared in the bookshops.

So reading Bartlett’s essay brought back that overwhelming sense of restriction, of lack, of closure. Only so many people got to be writers, only so many books got to be written. Of course, anyone could write in the sense that anyone could sit down at a typewriter. But writing in the knowledge you will not have readers beyond a few (hopefully) adoring friends and family feels, as Bartlett suggests, like “the most incisive sort of literary criticism”. And it’s not long before the pointlessness of it begins to eat away at your creativity, to “cut off [your] connection with the story” with that jeering who’s going to read it anyway voice in your head.

And before you know it, you’re under that duvet with Bartlett, “mourning confusedly” over the latest rejections and disappointments. How well I remember how I felt when one of my novels was accepted by an independent publisher! It was as if life was about to begin…and then disaster struck. There was a crash in the book market which made it impossible for a small publishing business to sustain its publishing programme. From a dozen or so titles a year, they went down to four. My book would have to wait. And so it did, and so did I, for three whole years, until I finally withdrew it. Nobody’s fault, and they said they still wanted to publish the book. But I couldn’t live any longer with that sense of constriction, of confinement, of block and bar. And although it was my decision, I cried every day for a month.

But by then everything had changed. In the 1980s Bartlett, me and writers like us had to accept our status as unpublished authors. Now no one has to accept that status. Self-publishing has opened up the world of publishing for just about everyone. Gone are the days when writing was only for a lucky and all too often privileged few, and gone too are the days when readers’ choices were limited to those books promoted by the publishing industry in a market they controlled.

I’m not thinking about the market here. I’m not so concerned about how we can all make millions banging out our latest Kindle offering, manipulating the algorithms, and maximising our SEOs. I’m thinking about what these changes mean for us as writers, as creators, as artists. I’m thinking of the potential for artistic growth.

Self-publishing has empowered us to take control of our own careers, to identify and focus on our niche markets, to focus if we choose on our art rather than what the market dictates, to write in multiple genres if we like, to experiment, do something unexpected, do something new. It’s empowered us to write. And it’s offered readers a greater choice of books, and options about how to read those books too.

Once only so many people got to be writers, only so many books got to be written, and we lived with restriction, lack, closure. Now all that’s been replaced by a sense of freedom, abundance, openness, possibility. Yes, it’s also brought its own challenges. Yes, some people still believe the myth that if you’re good enough, you’ll get a publishing contract, so it follows that self-publishing is for rubbish writers. And yes, readerships can be small and hard to find, breaking even an impossible dream, and self-doubt never goes away. And in that, at least, things may not have changed all that much for some of us since Nora Bartlett wrote her essay. Creativity is still all too often mingled with shame, misery and the constant battle against the destructive voices of both inner and external critics. But Bartlett carried on in spite of it all “as though they didn’t exist”. And so do I.

As far as I can tell, though, Nora Bartlett never did get published. In 2007 novelist Louise Doughty described An Excerpt From My Unpublished Writing as “the best essay I have ever read on what it is like to be a new unpublished writer” (The Daily Telegraph, 15 June 2007). So impressed was she, she often recommended it to her creative writing students. I too recommend it to anyone interested in being a writer.

And I mourn the fact that all I’ve got to read of Nora Bartlett’s work is this short piece. I feel sure she had something interesting to say, and that I’ve been deprived of hearing it. If self-publishing had been available to her, hers is a voice that would not have been silenced.

Available in paperback and ebook (The Fatal Coin ebook only)
Amazon UK
Amazon.com

Labels: On Gender and Writing, Self Publishing, Writers, Writing