Bitten by the writing bug: Alison Morton, Romans and Me

In my last blog, I reviewed Alison Morton's exciting new novel, Julia Prima. (You can read the review here.) I'm delighted that Alison was able to join us today to let us know more about her work. 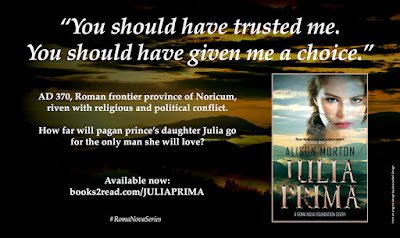 Tell us a bit about yourself and your books.

The writing bug bit me in late 2009 when I was watching a beautiful film spoilt by badly chopped up dialogue and clumsy continuity. I thought I could do better. It took me three years to learn through classes, mentors, courses and manuscript assessments that it wasn’t that easy. Being a voracious reader able to string sentences together grammatically wasn’t enough; structure, characterisation, plot layering and dialogue were essential crafts to master.

Inceptio, the first Roma Nova thriller came out in March 2013. The setting is south central Europe where a remnant of the Roman Empire has survived through the centuries and today is governed mostly by women. Now there are ten books in the series – three novels and a novella featuring my 21st century heroine, Carina, and the same number with 20th century Aurelia driving the action. Roma Nova Extra is a collection of short stories. Now, Julia Prima goes back to the 4th century and begins a new ‘Foundation’ strand in the series.

Why the Romans? What is it about them/their history that appeals to you?

Ah, the Monty Python question…Well, the sheer longevity for a start – 1,229 years in the West and over 2,000 years, until 1453, in the East. Of course, the scrubby little village in Latium on the west coast of Italia in the 8th century BC and the glittering, exotic 15th century AD ruin of Byzantium have little in common, but their inhabitants considered themselves Romans over that whole period.

The other attraction is the complexity and polarity within the Roman world whether you examine the early Republic, the transition from republic to empire, the crises, the scandals, the high culture and technology, the sophisticated trading network, the courage, ruthlessness, superstition, lawgiving and their talent for adapting and evolving.

Why this moment in the late 4th century AD?

The timeline split for the Roma Nova world was triggered in AD 395 when Emperor Theodosius (pushed by Ambrose of Milan) finally outlawed any non-Christian religious activity on pain of death.  Julia Prima is set in our ‘real’ historical timeline between AD 369 and 371, i.e. twenty-five years before that point, at a time when the Roman world was riddled with religious strife and on the brink of transformation. That transformation hasn’t kicked off yet in this new novel, but it’s hovering. No moment in history is fixed; it has its causes – direct and indirect – and its consequences – short term and long term. Behind the personal story of Julia and Lucius, Julia Prima shows how the signs of decline are well and truly there and sets the scene for the start of the collapse.

What made you decide to write alternative history stories as opposed to “straight” historical fiction?

As a ‘Roman nut’ since the age of eleven, I’ve had a deep interest, possibly an obsession with history, especially Roman history. When the creative writing bug bit me I knew there had to be a strong Roman element. Coupled with that was a desire to write a female lead who drove the story. Ancient Roman society was a strongly militarised one with no scope for women soldiers. A dilemma. I’d served in the British forces for six years so I knew that women were perfectly capable of working and fighting, if necessary, alongside men.

Then I read Robert Harris’s Fatherland and discovered you could write ‘alternate’ history. So if I wanted to have an active female lead in a military context, I would have to rewrite history along a different timeline. Enter Carina and Aurelia, 21st and 20th century heroines, both Praetorian Special Forces officers serving in Roma Nova.

Alternate history takes off from a point of departure (POD) triggered by an event, large or small. Although they are writing into a void, I don’t believe ‘althist’ writers should go completely off-piste and make up a load of implausible nonsense. They need to use the conditions prevailing at the point of departure as the basis for developing their alternative timeline along historically logic lines.

In essence, alternate history gives rein to the imagination to consider the ‘what if’ of history and possibly to provoke readers to look ant their own world differently.

You also write modern-day thrillers. Which genre do you prefer writing?

Perhaps I shouldn’t admit this, but all my books have a thriller element…It’s even there in Julia Prima. More seriously, I was challenged by historical fiction writer Conn Iggulden when he was endorsing Insurrectio to write a contemporary (non-alternative history) thriller featuring a European woman agent. I’ve always wanted to set a book with a heroine in France, which is where I live, so Double Identity and Double Pursuit were the result. But I still drag a bit of Rome into them. ;-)

One of the things that struck me about Julia Prima was the amount of convincing detail of everyday life – the clothes, food, travel, weapons and so on. I wondered  if you used re-enactment as one of your research tools. So, how do you go about the research?

I think readers like to find themselves in the place of the story, but without pages and pages of description. In our normal lives, we need clothes, shelter, light, food and if we wish to travel, a car, train or plane. We use cups, glasses, plates, close doors, open windows, go shopping almost without thinking. We owe it to our characters to place them in their normal and natural world where they eat and drink, work and travel. We compare Wifi speeds and curse when the internet falls down; they compare swords and daggers and curse when the household slaves misbehave.

I use a mix of book and online research, archaeology studies, re-enactment and my own experiences. The quality of re-enactors varies, but I’ve been impressed by the dedication and expertise of those at the Eboracum and Colchester Roman festivals.

There’s also an impressive sense of place – countryside, city, farm and town, weather and so on. I know from reading your newsletter that you visit as many Roman sites as possible. Given it’s all ruins now, do those trips help you realise the historical settings, and if so how?

There’s nothing like standing on a Roman road, by the Aurelian wall in Rome or near the Pont du Gard aqueduct in southern France, closing your eyes and letting your mind wander. You have to clear away the modern cars, people and roads and bring in your knowledge to supplement your imagination. It’s easier in more remote parts away from the built environment such as in the spaces between the barracks at Carleon in Wales (Isca). You see the same countryside, smell the same weather, look at the same sky that those legionnaries experienced.

For everything else, there’s Google Maps street view. (Sorry!)

What next for Julia and Apulius? Is Julia Prima the last we’re going to hear of them?

Ha! As usual, I had too much story for one book. I’ve started on the next foundation story set twenty-five years later in AD 395 when the real crisis pinched.

Do you think you might ever tackle any other historical period or are there still lots of stories to tell about Roma Nova?

I really don’t know. I’ve ventured into short stories – an alternative to the Norman conquest in 1066 Turned Upside Down, an 1849-set story of ‘The Idealist’ in Betrayal: Historical Stories; and I even wrote on my blog how Roma Novans helped relieve the siege in the Battle of Vienna in 1683. We shall have to see!

Where can we find out more about your work?