The only thing the books I've written about this month have in common is that I loved them both! So from epic fantasy to grounded-in-gritty reality historical fiction, here are my thoughts on Samantha Shannon's The Priory of the Orange Tree and Andrew Taylor's Bleeding Heart Square.

The Priory of the Orange Tree, Samantha Shannon (Bloomsbury, 2019)

Fantasy fiction can demand a great deal from its readers. There’s so much information to absorb, not only getting used to new characters and their settings, but learning how their worlds work. Unfamiliar histories, mythologies, places, technologies and politics come at you from the first page. Even the characters’ names can be confusing, and it can be harder to remember made-up names than ones you’re already familiar with. Many fantasy authors get around this by using names that sound like ones we know, as Shannon has done with some of her characters – Niclays evokes Nicholas; Margret, Margaret and so on. 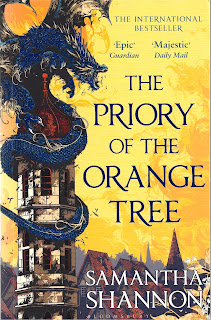 You have to have your wits about you to pick up all the clues. You also have to consent to a period of not knowing, of drifting along in a sort of happy confusion until you start to get things sorted out in your mind. Here, for example, on the very first page is the Warlord of Seiiki; but you don’t know who or what the Warlord is, or Seiiki come to that. Turn to the second page and there’s “Choosing Day” and now you’re asking, what is it? What’s the character being chosen for? And what are South House, and Kwiriki, and the red sickness, all blithely thrown at us as if we already know?

The Priory of the Orange Tree certainly struck me at the outset as one of those demanding fantasies. It wasn’t just that there were new histories to take in, but that there was so much of it. Almost every character, every place, every ritual was introduced with a potted history of its origins, stretching back hundreds of years in some cases. Did we need all that, I kept wondering? Is it necessary for this story for me to remember all this?

At times like this all you can do is tuck the bits of information away and read on, waiting for all to become clear. Which means you have to trust, firstly, that the author will make it clear; secondly that she’ll write well enough to hold your interest until it is; and thirdly that it will all be worth your while, because after all, who needs to learn pretend histories and geographies?

As I’d never read a book by Samantha Shannon before, I had to wait and see before I could answer the first point. The second was easy though. From the outset, the writing is superb. As for the third, it turned out to be very much worth my while. The characters are wonderful, and each has their own absorbing and engaging story. The settings are vivid and varied, and the plot is gripping, suspenseful, and at times surprising and going in directions I didn’t expect. Getting into this world with these characters might have been a challenge initially, but once I was in I didn’t want to leave.

There aren’t many books I re-read – one of the few exceptions being Robin Hobbs’s Farseer Trilogy which I’ve read four times now. But The Priory of the Orange Tree is going back on the reading pile. Dragons, magic, battles, myths, assassins, intrigue, and characters I cared about, served up in an epic tale brilliantly told...how could I not love it?

Let me just say from the outset that I think Andrew Taylor is a wonderful writer. I loved the Lydmouth mystery series and An American Boy, and my only regret is that I haven’t read more of his books – of which there are quite a few. So I opened Bleeding Heart Square with high hopes.

The book is set in a shabby boarding house in an obscure and murky square in 1930s London. Lydia Langstone ends up there when she leaves her husband Marcus, who is a nasty piece of work if ever there was one – and he’s a fascist into the bargain. She’s posh but poor, not used to independence and has few employable skills. She has no one to turn to except her estranged father, a broken-down old drunk and ex-soldier with a shady past who lives at 7 Bleeding Heart Square. Here she meets a very different class of people to those she’s used to. They include Rory Wentworth, an out of work but interesting young journalist; fat, obsessive Mr Fimberry; Mrs Renton, a dress maker; and the house’s owner Serridge, a sinister, manipulative, and threatening man. 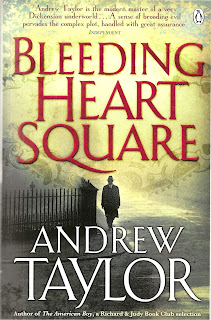 Before long the mysteries are piling up thick and fast. Why is there a man watching the house? What’s that horrible smell in the hall? Where is the previous owner of the house? How much does Lydia’s father know? The story is told from different points of view, mainly in the third person, but also incorporates two first person narratives, one of which is in the form of a diary. This presents the reader with yet more puzzles: who is the narrator and what is the significance of the diary?

As if all this mystery isn’t gripping enough, there’s the developing relationship between Lydia and Rory as they are drawn into the secrets lurking behind the grimy windows of No 7. Then there’s the atmosphere. Lots of atmosphere. The London of Bleeding Heart Square is a world of dark corners, shadowy figures, despair and barely-staved off destitution. The countryside Rory and Lydia visit in pursuit of the truth offers no relief from the gloom and menace. It’s a landscape of isolated farms, graveyards, clinging mud, and grey skies. Secrets lead to scandal and suicide; hints of violence erupt into outright brutality; and underneath it all runs the threat of war. Finally, it’s all brought together in a very satisfying and surprising conclusion.

Were my high hopes realised? Yes, they were. I loved Bleeding Heart Square and can’t wait to read my next Andrew Taylor novel.