People and Places: Writing with the senses, mood and atmosphere

Is there such a thing as a sense of place? Do places have atmospheres that we can sense? And how can historical novelists harness these responses in their fiction? I recently spoke to best-selling author Nicola Cornick about her timeslip novels for the Historical Novels Review, February 2022. The article is republished here and is also available on my website as a PDF document.

At a 2021 conference on ‘Imagining History: Wales in Fiction and Fact’, Dr Marian Gwyn remarked, “historical fiction teaches us how people and places connect”. (1) For readers of historical fiction, a sense of place is an important element establishing not only the physical milieu of a novel, but also the historical one. This is often achieved, as the familiar mantra has it, by evoking the “sights, sounds and smells” of a setting, that is, through the senses of the people in it. A sense of place is created by the characters connected with it.

However, setting may have another function besides conveying a sense of time and place. It can also create mood or atmosphere. This is most obvious in tales of the supernatural. Here, descriptions of manor houses, graveyards and cellars may be used to convey feelings such as horror or dread. But is this merely a literary conceit, or do places really have atmospheres? 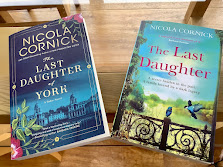 Nicola Cornick’s timeslip novels are all rooted in a sense of place. Indeed, place is often the initial inspiration. This is true of her latest book, The Last Daughter (Harper Collins, 2021) which links the stories of Francis Lovell during the Wars of the Roses, and present-day Serena Warren, haunted by the disappearance of her sister many years ago. It was the setting – Minster Lovell – says Nicola “that initially drew me in”. In a similar way, her first dual-time novel, House of Shadows (MIRA, 2015), was inspired by Ashdown House, a seventeenth-century hunting lodge in Oxfordshire, where Nicola works as a guide and historian. Even where a person is the starting point of the story, as Amy Robsart was for The Forgotten Sister (HQ, 2020), place (here, Cumnor Place in Oxfordshire) is still centre stage.

For Nicola, historic houses and sites are “characters in themselves with their own moods and behaviours”. These affect the story, particularly its tone, themes, and atmosphere. Nicola experiences Minster Lovell as a location with a “melancholy, slightly malign atmosphere”. This, along with the unknown fate of its one-time owner, Francis Lovell, to which the legend of a skeleton found in an underground chamber has been linked, provided the central theme of The Last Daughter, which explores disappearance. It is not a place where Nicola feels comfortable, and this discomfort is reflected in the character, Serena’s, sense of threat, loss and displacement when she is there.

These powerful reactions to place have long been recognised, particularly by artists, writers, philosophers and architects. Romans had their Genius Loci, the “Spirit of the Place”. These responses may have their roots in evolutionary or biological development. Humans, it is theorised, had to make rapid assessments of their environment, deciding whether danger or safety awaited them in the dark, out in the open, in caves and forests. These judgements became instinctive and we still make them, but so quickly that we are unaware of the process. Hence, we experience them as sudden and striking.

The way we respond to places by experiencing what we call “atmosphere” is clearly something that is determined by more than the information we take in through our senses. Danger and safety, melancholy and malignity are not things we touch, smell, hear, see or taste. These responses are also determined by elements such as our memories, imagination, prior knowledge, emotions, and culture.

These reactions are not always predictable. “Sometimes,” says Nicola, “the atmosphere will grab me immediately in some way.” On the other hand, “I don’t connect with some places at all”. She is drawn to ruins, to the “sense of lost grandeur that appeals to me and the idea that the history of a place is written into its remaining fabric, waiting to be rediscovered”.

Nicola’s fascination with psychometry is illuminating in this context. Psychometry is the ability to discover something about the history of an object and the people connected with it, by touching it. Many of Nicola’s stories, The Last Daughter amongst them, include characters who have this supernatural ability. Nicola explains that she was “fascinated by the idea of someone who could touch the stones of an old building and ‘see’ episodes from its history as a result”.

She acknowledges the influence of the ‘Stone Tape Theory’, the idea that memories can be stored in the fabric of a building or object and accessed later. A way of accounting for the experience of hauntings, it gained ground in the 1960s and 1970s. It was explored by, amongst others, archaeologist Thomas Charles Lethbridge (1901-1971), and found its way into popular culture in such productions as the 1972 BBC TV film, The Stone Tape. As Nicola puts it,  “It’s something I think you can get very close to when you visit a place and get wrapped up in the atmosphere. Your imagination provides all sorts of images of what might have happened there in the past and you feel as though you are within touching distance of the past”. She also acknowledges that it is a “very useful plot device in a dual time story!”

Even if you are not convinced by either the psychic or scientific theories mentioned here, they can at least be credited as attempts to explain that powerful response we call a “sense of place”. For the writer who is concerned with the experiences of people who inhabited a place in the past, a sense of place provides tremendous inspiration, feeding into the creative mix of research, imagination, and empathy that go into a historical novel. Historical fiction may indeed teach us “how people and places connect”, but our connection with places also enables us to write historical fiction.

To find out more about Nicola Cornick see her website https://www.nicolacornick.co.uk/