The Widows of Malabar Hill is the first book in the 1920s mystery series featuring Perveen Mistry, Bombay’s first and only woman lawyer. Like all good mysteries, it’s got plenty of secrets at its heart. The central secret is, of course, kept by the murderer. But there are other secrets, such as the secrets of an adulterer or an embezzler. There are the secrets of a marriage, the things one partner keeps from anther; secrets within a household; and secrets around normal bodily functions such as menstruation, during which, in some families, women are kept apart from the rest of the family. Even the buildings have secrets: tunnels, screened windows, locked rooms.

Not all the secrets are sinister. Perveen’s father, in his determination to protect his daughter, keeps things from her. Perveen hides her unhappiness from her parents as she doesn’t want to worry them. The secrecy surrounding the lives of the three widows, who live in seclusion in their house on Malabar Hill, is desired and defended by them. They do not want contact with the outside world; it is by choice that it remains as hidden to them as their lives are to outsiders. 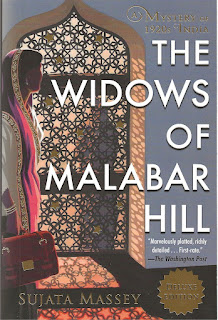 It all makes for a gripping read as we move towards not only the solution of the crime, but also to multiple revelations about the lives of our various characters. The gradual unfolding of Perveen’s past is handled in a series of flashbacks that fit well thematically with the events Perveen is caught up in. Her experiences illuminate her character and her actions: you can see why she cares so much for the well-being of the widows, and why she feels so passionately about protecting and improving women’s legal status.

Perveen is a wonderful character: smart, brave, and caring. Like all good heroines or heroes, she’s also sometimes a bit larger than life. Her self-possession when she’s attacked felt more like James Bond than a young woman whose life looks likely to end. The way she gets out of her sticky situation, thanks to a large dollop of coincidence, was a bit too easy too. Still, it’s all very satisfying. So is the book’s adherence to the fundamental rule of fiction propounded by Miss Prism in Oscar Wilde’s The Importance of Being Earnest, that the good should end happily, and the bad unhappily.

The edition I read included a lot of interesting extra material, such as historical notes, a glossary, an interview with the author, and even a few recipes. It also had a number of discussion questions, which I assume are intended for book groups. I’m sure there are many people who appreciate the trend for providing questions for book groups, but they always strike me as more than a little pretentious. It’s as if the book has a big sticker on it blaring “look at how significant I am!” Besides, I would have thought readers were perfectly capable of thinking things through for themselves without having their responses guided by these solemnly school-teacherish nudges. Still, I suppose that publishers include them because they know many readers welcome them, and of course they’re easy to ignore if they don’t do anything for you.

Overall, then, I really enjoyed this book and am looking forward to reading Perveen Mistry’s next adventure.

In fact, it’s been a detective fiction bonanza. At the end of the month I’m giving a talk on Victorian detective fiction, and I’ve been rereading some old favourites. I revisited some short stories about the “other” Victorian detectives – the ones who aren’t Sherlock Holmes – including Baroness Orczy’s Old Man in the Corner tales, Ernest Bramah’s Max Carrados, and R Austin Freeman’s Dr Thorndyke. I also reread some of Charles Dickens’s marvellous accounts of his nights out and about with Scotland Yard detectives in London’s rookeries, drinking dens and lodging houses, published in his magazine Household Words.

A new read was The Notting Hill Mystery by Charles Warren Adams. Said to be the first detective novel, it was published in serial form in 1862-3, and in book form in 1865. It’s written in the form of documents and evidence collected by an insurance investigator, such as witness statements, medical reports, a marriage certificate, and crime scene map. It’s an interesting way to tell a story, but I felt it obscured the narrative to some extent, and I sometimes found it hard to follow what was happening and who everyone was. I also felt that the use of these clever devices camouflaged the fact that it was actually rather a thin story. If it had been told as a more straightforward narrative I am not sure there would have been enough substance in it to make an interesting novel. Still, it was very skilfully done and I enjoyed reading it.

Best of all, though, was going back to The Moonstone by Wilkie Collins. And on that, I agree with Dorothy L Sayers that it is “probably the finest detective story ever written”. It’s certainly one of my favourites. 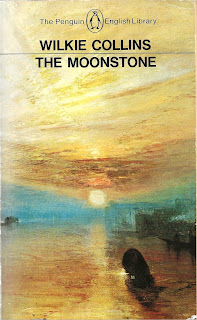 I’ll be talking about The Victorian Origins of Crime-writing at the Crime, Thriller and Mystery Novels afternoon for Hawkesbury Upton Literary Festival on 30 April 2022. https://www.eventbrite.co.uk/e/hulf-talk-crime-thriller-mystery-books-tickets-268082260257