The work women did during the First World War, when many moved into occupations formerly carried out by men, is often viewed as a gateway to liberation. The new skills they learned and the wider variety of jobs available to them gave them the chance to earn more than they could in traditionally female occupations (though still, usually, less than men). Women could now afford to live independently, either on their own or sharing with others. Now, at last, women had stepped out of the cage.

Or so the story goes. It’s interesting, then, to find a different perspective in Latchkey Ladies, for the women in this novel do not want these new-found freedoms. They do not want to be single, and they do not want to go out to work. For them entry into the work place does not mean liberation, it means mind-numbing drudgery. The possession of a latchkey to their own rooms does not mean independence, it means loneliness; the struggle to make ends meet; shabby clothes; and the realisation that women who have no husband, no home and no children are insignificant women who possess nothing more than “the right to eat and live and die unregarded”. 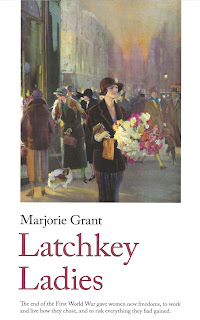 Although the story centres around a group of women, these themes are explored chiefly through the story of Anne Carey. Far from doing work of national importance, Anne’s war work in a government office is futile and meaningless, consisting of precising unimportant letters or of checking that papers are filed in date order.

None of this, in Anne’s view, is women’s work. Women’s work is children. Without children, their lives are useless. As her maiden Aunt Minima (the author has burdened Anne’s twin aunts with the whimsical names Minima and Maxima) tells Anne, she is “the type that cannot flourish physically or mentally without the normal woman’s life – children”. For the aunts, the intellectual life is enough. It is a life Anne characterises as bleak. Maxima, a headmistress and a lesbian, has been “diverted from her natural path” which should have included “spoilt babies”. As for Minima, her intellectualism has descended into twittering dilettantism and faddism.

The twin aunts are not the only examples of the dire consequences of the single life for women. “I know so many unmarried women,” says Anne, “and they’re all queer – that’s why I won’t be them.” They include the working women who frequent the ladies’ Mimosa Club because it is cheap and offers, remarks Anne, “the illusion of privacy and comfort” for women who do not have, but long for, their own homes. Other Mimosa Club regulars are a snobbish spinster, and a downtrodden companion who dies raving about their “unnatural lives” without children. Then there is Petunia, the beautiful young girl who Anne first meets in the house of a sleazy man who likes to surround himself with young women. Only another man can save her from the “seamy side of wage-earning”, and she is rescued by marrying into the upper classes.

Far from experiencing independence as liberating, for these women it is nothing but misery. For one thing, many of them have not chosen the life. It is only the fact that husbands, fiancés and eligible bachelors are away at the war that compels them to live as they do. For many of these women, things will never change for the better because, of course, many men will not return.

The fact is, though, that the single life simply does not suit everyone. Anne realises “how miserable women are all alone. Latchkey ladies, letting themselves in and out of dismal rooms, being independent and hating it. All very well for people with gifts and professions, artists or writers. But for us, the ordinary ones, a latchkey is a terrible symbol”.

Having no option but marriage and children was bad enough, but is having that option denied them any better? And what of women who don’t marry, but who still want children? What are they to do? This is the dilemma that confronts Anne when she falls pregnant, and this is the dilemma at the heart of the book: women’s right to choose. As the (“mannish”) doctor who looks after Anne declares, “I want clinics for common sense, and I’d teach how not to, as well as how to have a family. But to my view every woman with the instinct for a child (and some certainly have no such instinct) ought to have one”.

Latchkey Ladies is a powerful book that takes an unflinching look at women’s lives as they were lived. It raises many questions that are still relevant today – for example the value of independence, the nature of work, money, marriage (it is “rather limiting” one character remarks), motherhood, and sexual freedom. The characters are well drawn, if occasionally a little clichéd (the snob, the put-upon companion), and their stories are interesting and well told. In spite of all this, it was not a book I liked. Its chief downfall, for me, was Anne Carey. I found her such a dislikeable character.

She seems convinced of her own superiority. Much of her dissatisfaction with her work stems from the fact she’s forced to mix with people she thinks are beneath her. As her female supervisor recognises, “Some of the young ladies are not very well brought up…But…Miss Carey is beautifully brought up”. Miss Carey responds to her colleagues by mocking and laughing at them.

As well as the superior attitudes of her class, she also shares its racism, remarking on Petunia’s “Oriental” qualities and joining with a friend’s gossip about her. “Possibly,” agrees Anne, “there is a far-away colour touch somewhere.” Of course, these are attitudes that were prevalent at the time, but does that mean that everyone had to hold them? Are there no contemporary books with characters that don’t, I wonder? (I am not, incidentally, suggesting that we fall into the trap of assuming that these were Grant’s views because her character expresses them; what I am saying is that I didn’t like the character for expressing them.)

Anne’s tone is often sharp, bitter, and unkind. True, she is unhappy, war-weary, and dreadful things do happen to her. She faces them with courage, and of course there is no reason why women should be all sweetness and light. But when she does display softer feelings, they often lapse into ghastly and icky sentimentality about kittens and babies. She’s forever kissing chubby children and encouraging her pupils to write verses (“Baby, where do you come from?/Out of Fairyland?”). It is easy to see why I ought to be fair to Anne – but I couldn’t be fond of her.

All in all, though, I would say Latchkey Ladies is well worth reading, not least for the different perspectives it offers on women’s experience of the war. There’s also an illuminating and perceptive introduction by Sarah LeFanu.

I read a review copy provided by the publisher, Handheld Press.