Both of the books I've selected this month look at different societies - one imagined in the future, the other real and in the past. For fiction there's Octavia Butler's Parable of the Sower, and non-fiction is City of Beasts: How Animals Shaped Georgian London by Thomas Almeroth-Williams.

Dystopian fiction is gloomy, isn’t it? Especially when it’s all too horribly believable. Octavia Butler’s Parable of the Sower posits a world confronting catastrophic climate change; an equality gap which has grown to such proportions that life is a bloody battle between the hungry homeless and the fed and housed who live behind protective walls; a violent drug culture; and privatisation of just about everything. It’s the world you get if racism, inequality, capitalism, fundamentalism, gun culture, and eco crime are allowed to run rampant.

Fifteen-year-old Lauren Oya Olamina seems to be the only one who recognises that the old world is finished, and when her neighbourhood finally succumbs to the violence, she sets off in search of a place to found a new community and a new religion. What follows is a journey or road narrative during which she confronts various dangers and meets people who turn out to be friends or foes. Apart from wondering a little about her precocity, I found her story compelling and her theology fascinating. If the old God/gods are no longer relevant, what sort of God does humanity need now? 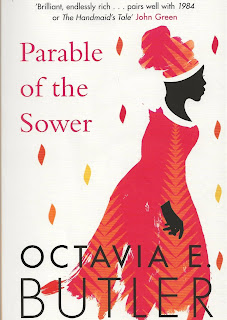 The book raises many other questions. How are we to deal with the violent and brutalised people bred by a violent and brutal system who cannot be reasoned with because they are feral, drug-addled, and cruel? Is it possible for any kind of civilised, ordered community to exist in the midst of chaos? Is the civilisation we have achieved (which isn’t much, you might think) really so fragile? Or does a system rooted in slavery, exploitation and oppression necessarily contain the seeds of its own collapse? And did Butler really believe this is where we are headed?


It seems that she did not, insisting (speaking about the second book, The Parable of the Talents) that, “This was a cautionary tale, although people have told me it was prophecy”. But even she found the series “too depressing” to finish (New Yorker, 26 July 2017) and wrote only one more Parable book from a planned four. Still, in spite of the gloom, I’m looking forward to reading The Parable of the Talents because I’m intrigued to know how Lauren’s story continues.

On a side note, I did find the cover of Parable of the Sowers a little annoying. I know publishers have to sell books and an effective way of doing that is to compare them to other books (though how much those books have in common is often another question). Butler’s book is given the stamp of approval because it “pairs well with 1984 and The Handmaid’s Tale”. The comparison is unsubtly reinforced by the cover illustration which echoes the figure appearing on recent editions of The Handmaid’s Tale. I call her The Red Lady, and it seems she’s started to make an appearance on other books featuring women who go against the grain – she’s also on the cover of Niamh Boyce’s Her Kind.

Is The Red Lady a trend, I wonder? Perhaps not, as a quick search for other books featuring her failed to turn up any more. Still, I’ll be looking out for her in future… It also turns out that the comparison “pairs well with…” was offered by the author John Green in answer to the question “What book would you add to the high school curriculum?” posed by the New York Times in 2018. Knowing that he cited 1984 and The Handmaid’s Tale because they are already taught in schools makes a bit of a difference to the quote, I think.

Natalie Proulx, ‘What Book Would You Add to the High School Curriculum?’, New York Times, 5 September 2018

In 1808 two pugilists, Tom Cribb and John Gully, were out walking when they came upon a group of men, one of whom was beating a pig with a stick. Cribb asked the man if he owned the animal, and on the man replying that he did not, Cribb asked him to stop ill treating it. The man refused and, unaware that he was talking to the champion of England, offered to give Cribb a beating instead. A swift one-two from Cribb later he was nursing a bleeding head while Cribb gave him a lecture on cruelty. Gully, meanwhile, offered to take on any of the other men but none took him up on the offer.

The story came to mind when I was reading Thomas Almeroth-Williams's City of Beasts, a study of animals in Georgian London. It’s an intriguing tale that raises all sorts of questions. What difference did it make whether or not the man owned the pig? Why was he beating it? Why did Cribb take exception to cruelty against an animal when he was in training for a brutal bare-knuckle fight? His bout with Bob Gregson took place on 25 October 1808 and left both men exhausted, bloodied and battered almost beyond recognition.

Above all, what does it tell us about the place of animals in Georgian life? It’s a question that few historians of the Georgian era (or any era) have addressed, and by and large animals have been left out of history. Yet, as Almeroth-Williams shows, they were part of the daily life of not only rural but urban dwellers. Georgians relied on animals for power, food, recreation, company, entertainment, and protection (offered by guard and house dogs). Breeding, keeping, selling, and moving livestock impacted hugely on the economy, infrastructure, and agriculture. Without the labour of beasts, industries like tanning, brewing and brickmaking could not have achieved the levels of production they did. And every day, on every street, in every market, park and common, and in shops, inns and houses, Londoners encountered animals.

Not only this but, argues Almeroth-Williams, these animals had agency: they interacted with, and impacted on the behaviour of, humans. Relations between humans and animals were (and are) complex, and in recognising this, the book is a refreshing challenge to the speciesism which sees humans as the only creatures worth a place in history. (But then how do you decide which are? Is it only the ones which benefit humanity which count? Would I read a history of rats, fleas and cockroaches I wonder? Something else to think about…)

City of Beasts challenges many assumptions, questioning, for example, ideas of the speed and impact of the Industrial Revolution, the distinction between urban and rural, and attitudes to cruelty and sentimentality. It does not present a simplistic linear history tracing how we left behind the animal abuse practised by our ancestors to become the enlightened people we are today. “This,” writes Almeroth-Williams, “flatters our behaviour and misrepresents the actions of Georgian Londoners”. And, he points out, at least they “looked their victims in the eye”, whereas modern Londoners consume animals bred and slaughtered “out of sight and out of mind”.

The book touches on questions about our relationship with nature, and the sustainability and future of food production. It also looks at the life, work and experience of people who rarely appear in the history books, such as drovers, milk maids, grooms and pig keepers.

City of Beasts is one of the most refreshing and original histories I’ve read in a long time – and I read a lot of books about the eighteenth century. It brought Georgian London to life in a cacophony of barking, mooing, grunting and whinnying; nose-wrinkling and shoe-destroying piles of plop; and the heart-stopping perils of sharing the streets with clattering coaches, carts and wagons, or confronting unpredictable herds of sheep, cattle and pigs. Few books I’ve read, fact or fiction, have given me such a vivid impression of the city in all its noisy, smelly, busy, everyday, and down-to-earth life. Brilliant.