Pugs, Roos and Amazonians: Some Lesser Known Boxing Matches of the Eighteenth Century

In eighteenth and nineteenth century Britain, bare-knuckle boxing was a popular sport which drew followers from across the social spectrum, from the Prince of Wales and the aristocracy down. Charles Dickens loved a boxing match, and was one of the crowd who gathered in 1860 to watch Heenan v Sayers, which also included the Prime Minister, MPs and clergymen (see my blog Dickens and Chickens). However, not all boxing matches took place in an official ring in front of thousands of spectators, with the representatives of the Fancy out in large numbers to watch fighters like England champions Jem Belcher or Daniel Mendoza fight it out for huge stakes after weeks of training. Many fights were spontaneous affairs between amateurs. Others were what you might call ‘novelty’ matches between unusual combatants, many of which were cruel and crude.


Spontaneous fights arose out of everyday disputes: when men quarrelled they fought. Many of these matches, which look like nothing more than street brawls, were reported in the press as if they were organised fights, using the same language and assessing them in the same way as more official examples of the “fistic science”. Far from calling the police or attempting to put a stop to the violence, crowds were likely to gather to watch – in the contemporary phrase “a ring was formed”.


You find many newspaper accounts of such spur-of-the moment bouts between tailors, butchers, bakers, coachmen, soldiers and others who had annoyed one another in the course of their daily business. Readers of The Pickwick Papers might remember that Mr Pickwick himself got into a fight with a coachman who thought he was an “informer” – people who rode about in hackney carriages and collected rewards for reporting drivers who over charged or did not display their registration numbers. A “mob” soon gathers to watch the coachman “give it him”.

Often these fights were not settled on the spot, but a match was arranged for a later date. In 1805 a fishmonger and a butcher of Newgate Market met on White Conduit Fields to settle a quarrel about a five pound note which the fishmonger was accused of stealing. In the same year a billiard-table keeper and a Frenchman fought at Knightsbridge. Both were actors in a private theatre, and their argument had arisen over a dispute about who should play one of the characters in a play called Venice Preserved. Their original impulse had been to duel with pistols, but they were luckily persuaded to try settling their differences by the “fistic arts” (Morning Advertiser, 27 December 1805) instead. They do not seem to have been very skilled, managing few hits and ending by tearing out one another’s hair.

However, not all fights were between men and there are numerous examples of women fighting. As with the men, many of these bouts were the result of a quarrel. In 1722 Elizabeth Wilkinson and Hannah Hyfield arranged to fight in public to settle a dispute, each woman to hold half a crown in her hand and the loser to be the first to drop the coin. In 1800 two fruit sellers settled an argument about the quality of a basket of cherries by fighting for a two guinea stake in the coffee room at the Royal Opera House. As usual, spectators gathered, a bottle holder was found, and the fight ended in a draw.

In 1793 near Chelmsford, Essex two “ladies of pugilistic spirit…set to” (Pancratia, Or A History of Pugilism, 1812). They fought for forty five minutes when although one of them was badly beaten, her husband wanted her to fight on. However, the spectators separated them. The author of Pancratia adds that in spite of his support of pugilism “he by no means feels desirous to see such conflicts displayed by the softer sex. It is…their acknowledged inability of defending themselves, that frequently excites us to acts of greatest bravery and gallantry!”

Some male followers of the fancy took women's pugilism more seriously. Two “heroic females” fought in 1795. They were Mary Ann Fielding of Whitechapel, who was seconded by boxing champion John Jackson, and a “noted Jewess” who was seconded by Daniel Mendoza. Fielding won the two guineas prize money after an hour and twenty minutes. Sometimes, though, male interest in female pugilism is dubious to say the least. At a match between “two Amazonian fair ones” (Oxford Journal, 20 June 1807) in West Grinstead in 1807 the protagonists fought, like the men, with seconds and bottle holders and in a good sized ring, and were said to have bottom and fight in a good style. Also like men, they fought naked from the waist up.

Fights between children were not unknown. In 1806 two fourteen year old boys fought on Wimbledon Common. They were praised as “Mendozas in miniature”. They were separated after ten rounds and the appreciative crowd made a collection for them. This was often done if there was no prize money or if a plucky loser was likely to go away empty-handed.

I have come across one disabled boxer, a man called Chapman who was born without arms. In 1796, in Erith, Kent, he fought a Woolwich blacksmith, Knight, who was a well-known boxer. They fought for an hour, Chapman using his head and heels to such effect that Knight was carried off with two broken ribs.

Another fight which relied on its entertainment value for the display of bodies which did not match the manly ideal of the pugilist was the match in 1828 between dwarves David Morgan, a Welsh man, and Peter McBean, who was Scottish, at Whetstone near Barnet. The Weekly Dispatch (10 February 1828) considered it a low-brow affair that did not attract true fans of the ring, and which very few respectable people attended. The whole thing was played for laughs at the expense of the fighters, and the sky “rang with laughter”. While conceding that it was “a good lark for the spectators”, The Weekly Dispatch concluded that “the interests of pugilism will be best consulted by avoiding such exhibitions in future”. Nevertheless, they devoted over a column to the match report.

Perhaps the oddest idea I’ve come across so far was the one proposed between Jem Belcher and a kangaroo. An unnamed man who had recently arrived from Botany Bay was said to have brought a six foot high kangaroo with him that was so tame it had worked with the ship’s crew on the journey home. According to the Sporting Magazine and Monthly Calendar (September 1802) the animal “spars and fights with as much science as the best bruiser”. In spite of his short arms, he had the advantage of being able to kick his opponent to death. The owner offered to fight him against Belcher for two hundred pounds. The kangaroo was favourite to win. I have not been able to discover if this was meant as a serious proposal, nor how Belcher reacted to the suggestion, but the fight did not go ahead. 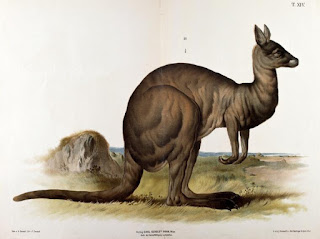