My selected books for June took me from the beauty and culture of the Morris home at Kelmscott House, London in May Morris: Arts and Crafts Designer, Anna Mason et al, to the prison walls and harsh outback of Botany Bay in No Ordinary Convict: A Welshman Called Rebecca by Janine Marshall Wood, a book I read in draft before publication.

In 2017 the William Morris Gallery in London staged a major exhibition about the life and work of May Morris (1862–1938), artist, feminist and socialist. It was widely hailed as a long-overdue reassessment of the life and work of a key figure in the Arts and Crafts movement. May Morris: Arts and Crafts Designer was published to complement the exhibition, and described itself as “the first publication to present the full range of May Morris’s work”. 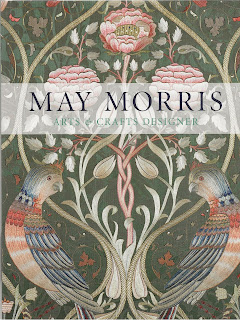 The only question is: why? Why has it taken so long to acknowledge May Morris’s contribution to the Arts and Crafts movement – a contribution that is by no means negligible? I suppose the possible answers are obvious. She was overshadowed by her father, the multi-talented William Morris; perceived as an assistant in the work of Morris & Co (she was head of the embroidery department) rather than as an artist in her own right; the Pre-Raphaelites and their successors were a Brotherhood; and sewing, well, it’s for girls, and anyway it isn’t really art, is it?

Sewing is not, of course, exclusively for girls, as Joanne Begiato demonstrates in her discussion of needlework by soldiers and sailors in her fascinating book Manliness in Britain 1760–1900: Bodies, Emotion and Material Culture (Manchester University Press, 2020).

And in the unlikely event that you do need convincing that embroidery is art, you won’t need to have this book open for very long before you see that not only is it art, it is art of a very high calibre. May Morris believed that the designer should also be the maker, and so both the design and the execution of her works are stunning. But there’s no point me writing about it:  all I could manage is a litany of praise which wouldn’t be very interesting to read.

May Morris’s achievements as an art embroiderer are astonishing, but she also excelled in other areas. She designed wallpapers, made jewellery, and painted watercolours. She was a teacher, writer and diarist. She was a business woman, an innovator in her art, and an activist who, when she realised that the Art Workers’ Guild did not admit women, founded the Women’s Guild of Arts.

The book reflects her talents in a collection of essays, every one absorbing, authoritative and well-written. Jan Marsh’s chapter opens the volume with a short biography. Jan Marsh published a biography of May and her mother Jane in 1986: Jane and May Morris: A Biographical Story 1839–1938. Other chapters look at May Morris’s sketches and watercolours, wallpapers and embroidery, jewellery, dress design, book cover design and so on. The book is wonderfully illustrated, and the descriptions and notes which accompany the illustrations are illuminating and informative.

The book also contains a “further reading” section, and a chronology of key events in May Morris’s life. But it’s not those I’ll be poring over as I dip into the book again. It’s the wonderful photographs of the exquisite owls, honeysuckle, poppies, trees, gardens and other subjects that May Morris designed and made.

Over to Australia now – by way of Wales – for a report on a book I read before it was published. The author is Janine Marshall Wood, who lives in Melbourne, though confesses to missing Tasmania, where she previously lived. Janine and I have never met, but circumstances led us into an email correspondence and I was delighted to have the opportunity to read and comment on a draft of the book. 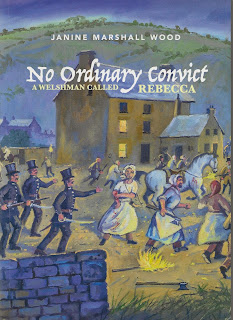 In the course of my research into the eighteenth century, I have come across many stories of British men and women who were transported to Australia after being convicted of crimes ranging from picking pockets to murder. As they disappear into the blue, it can feel like the end of their story, and for many of them it certainly was as far as Britain was concerned. Even those who might have returned at the end of their sentences often chose to stay on in Australia and spend the rest of their lives there. So it was really interesting to find out more about what those lives might have been like.

By the time Welsh farmer John Hughes (1819–1905) was sent to Australia in 1844, transportation on a significant scale had been in use in Britain since 1718 (though it had been introduced as early as 1597 when Justices of the Peace were empowered to exile offenders). Initially convicts were sent to America, but the American War of Independence (1775–1783) put paid to that. Luckily for the authorities – though perhaps not the convicts – a new land had opened up: Australia. The first convicts arrived there in 1788 and, blithely ignoring the fact that there was already an indigenous population, the British established their penal colonies and settlements. Transportation lasted until 1868, and it has been estimated that 162,000 men, women and children were transported.

Some of the transportees were political prisoners. John Hughes can be counted amongst them. His crime was to take part in attacks on toll houses and gates carried out by Welsh farmers and others in protest about high costs exacted on the toll roads. The Rebecca rioters wore women’s clothes and carried out night-time raids to demolish toll gates. John Hughes was arrested during a violent clash with soldiers at a gate in Pontarddulais.

Janine Marshall Wood’s book fleshes out this very broad outline with background about Hughes and his family, the region, and the social background to the Rebecca riots. There is a long account of the trial, as thrilling as court room scenes usually are. We then follow Hughes on his voyage, and learn about his life as a convict with its harshness, rules, opportunities for rehabilitation, and all too frequent setbacks. The book also gives an insight into attitudes about convict history: how the stigma of having been a prisoner attached itself to individuals for the rest of their lives; their families’ and descendants’ eagerness to suppress the fact; and the more recent project of historians to recover and investigate it.

It was wonderful to go from seeing drafts of the book on my computer screen to having a copy of the finished work, in which the text is enhanced by numerous well-chosen and well-placed illustrations. There are some lovely photographs by the author’s husband, Harvey, and of particular note is the original artwork by John Wynne Hopkins of Llanelli Community Heritage, Wales. The reader will appreciate the family trees and timeline, as well as the bibliography. In addition, there are useful appendices comprising letters, petitions and some slightly bonkers and definitely sycophantic verses by J H Rees addressed to Queen Victoria (“our lov’d Queen, whom Cambria joyful hails!/ As Sovereign Mother of Her ‘Prince of Wales’”).

But most moving of all are the letters of John Hughes himself, written to and carefully preserved by his family in Wales. His last surviving letter was written from Tasmania in 1890, by which time Hughes had married, had children, and found comfort in his Christian faith. He had spent most of his life in Australia, yet he was still conscious of his status as an exile: “Now Dear Will I hope you will write to me quick and tell me all you Know of our old home – I wonder that some of them don’t write to me – I suppose I have disgraced them”.

Home was still a Welsh farm on the other side of the world.

'The Political Drama: The Ministers and Their Cronies off to Botany Bay and the Dorchester Men Returning', Cartoon 1834-35, Charles Jameson Grant, British Library on Flickr, No Known Copyright Restrictions.