In 2006 the BBC Antiques Road Show was filmed at the University of Sydney. One of the items their experts valued was a suffragette tea set manufactured in Staffordshire by Williamsons of Longton. It comprised six art deco cups, saucers and plates, a cake plate, tea pot, milk jug and sugar bowl decorated in the colours of the Women’s Social and Political Union (WSPU). The set was decorated with the iconic design of the angel of freedom blowing a trumpet and carrying a banner with the word “Freedom” on it. 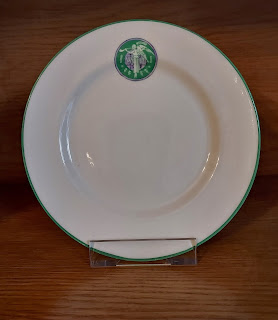 The tea service was designed by Sylvia Pankhurst for the WSPU’s 1909 exhibition at the Prince’s Skating Rink in London. A Scottish version for use at a WSPU exhibition in Glasgow was produced in 1910. The angel design was also used on the cover of bound copies of the WSPU newspaper, Votes for Women.

As soon as I saw the Sydney tea set I wanted one! Alas, these are very rare items and consequently very expensive. Complete sets are rarer still, and it’s more usual to see pieces sold separately or in small groups, such as a collection of four pieces which the Shropshire Star reported was due to be sold in May 2019.

The Shropshire Star described the event at Prince’s Skating Rink as a “now-forgotten exhibition”. This must have come as something of a surprise to the many historians, researchers and biographers who have written books, articles and blogs about the suffrage movement. I suppose it’s easier to conclude that if you don’t know something yourself, no one else does either. A lot easier than, say, looking out the many sources that are available.

The WSPU exhibition at the Prince’s Skating Rink took place from 13 to 26 May 1913. Sylvia Pankhurst designed and executed the twenty feet high decorations for the hall, helped by three women with whom she had studied at the Royal College of Art, and four men who had also studied there. The exhibition included a mock up of a prison cell, a polling booth, an exhibition about the history of the suffrage movement, “Anti-Suffrage Waxworks”, plays, and ju jitsu lessons (useful in tussles with the police).

It also included a refreshment room where you could have tea and cake using china from Sylvia Pankhurst’s tea service. After the exhibition, the tea service was sold in sets. I don’t know how one of those sets made it all the way to Sydney, but I remember thinking it was a miracle it had survived the journey. And, of course, much as I coveted some of the tea set for myself, I didn’t think I’d ever own any of it.

But this year Suffrage Santa had other ideas! In the run up to Christmas, I eyed with some curiosity a large, mysterious parcel that appeared under the tree. Luckily, I refrained from shaking, rattling and tapping it in an effort to guess what was inside. 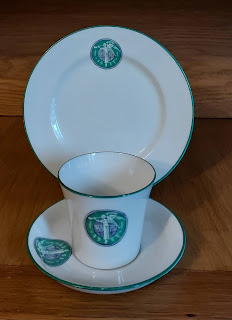 You can find out more about suffragette china and tea rooms in a series of blogs by Elizabeth Crawford at https://womanandhersphere.com/tag/suffragette-tea/.

The WSPU Drum and Fife Band advertising the 1909 WSPU Exhibition, The Women's Library at LSE, No Known Copyright Restrictions

December 19, 2015
On 17 April 1860, in fields near Farnborough, Charles Dickens joined an audience amongst whom were the Prince of Wales and the Prime Minister, Lord Palmerston, as well as a number of MPs and clergymen, to watch the American John Carmel Heenan and England’s Tom Sayers (the Brighton Titch) beat one another blind and bloody in a bare-knuckle fight that lasted nearly two and a half hours. The fight ended in a draw when Aldershot police stormed the ring, forcing the fighters and their illustrious spectators to flee the scene. It was the brutality of this match that signalled an end to the bare-knuckle era and prompted the development of the Marquess of Queensberry’s rules. Dickens’s interest in pugilism was of long standing. In 1848 Dombey and Son , which had been published in serial form over the preceding two years, came out in book form. One of many of his novels that draws on the world of the prize fighter, it introduces the unforgettable Mr Toots, a would-be man about town, an
Post a comment
Read more

March 08, 2020
It’s International Women’s Day today and I’ve been thinking about the women who inspired me. On Friday I was at the unveiling of a Blue Plaque to one very inspirational woman – Bristol-born suffragette Emmeline Pethick Lawrence. She was brought up in Weston-super-Mare and the Plaque was placed on her childhood home, Lewisham House, 80 Bristol Road Lower, Weston-super-Mare. Afterwards, I spoke at a panel event which was part of Weston-super-Mare Literature Festival. W riter and explorer Jacki Hill-Murphy told us all about some remarkable women travellers, including Isabella Bird whose biography she’s just written. Biographer Kathryn Atherton , author of Suffragette Planners and Plotters: The Pankhurst/Pethick-Lawrence Story , shared Emmeline Pethick Lawrence’s remarkable story with us. I gave a short talk about one of my own Inspirational Women – Mary Wollstonecraft. Here is the text of the talk, in which I explain why she is, for me, such an Inspirational Woman.
Post a comment
Read more