You Daughters of Freedom by Clare Wright


In my last blog, I looked at the question of the British press’s “boycott” of the suffragette movement. The piece was prompted by my reading of Clare Wright’s You Daughters of Freedom: The Australians who won the vote and inspired the world (Melbourne: Text Publishing, 2018). So in this blog, I’d like to share some of my thoughts about the book.

Overall, I very much enjoyed this book. The author’s style is direct, even forthright – you are never in any doubt about where she stands on any of the issues raised! It was fascinating to read about the suffrage campaign from an international and colonial perspective. In addition, I particularly liked the biographical approach which focussed on the stories of individual women such as Nellie Martel, Dora Montefiore, Muriel Mattters and Vida Goldstein.

At times, though, I thought the prose a bit over the top and prone to exaggeration – Vida Goldstein “was the dawn”,  “Dora had the opportunity to march in the front line of history. Literally.”, “the core of the metropole was red hot, molten bullshit”, “The world” watches the British suffrage movement, “The new wave of Australasian progressivism had come crashing on to the old world’s crumbling shores”.

There’s also the question of the “press boycott ruling out mainstream media coverage.” The claim is repeated with the same aggrieved air as the WSPU’s own complaints that the British press refused to report on their activities. However, the fact that it suited the WSPU at other times to boast that thanks to them there no longer was a boycott does suggest that it isn’t always a good idea to take the WSPU’s propaganda at face value. (As mentioned above, I considered the question of the press boycott in my last blog, The Suffragettes and the Press Boycott.)

Yet the fact that the book raised these issues and gave me much to think about is a measure of how much I enjoyed it. It opened up new perspectives; revealed some shocking facts, chief of which was the White Australia policy; and told the stories of women whose lives deserve greater attention than they have previously received. And I could never accuse You Daughters of Freedom of being boring! All in all it’s a great read. 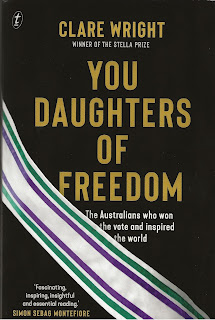