The Suffragettes and the Press Boycott

When Christabel Pankhurst and Annie Kenney were sent to prison in 1905 after interrupting a Liberal politicians’ meeting in Manchester, one of the victories they claimed was that for the first time in years the press had taken notice of the women’s suffrage movement. The point of the protest – and of much of the militancy over the next few years – was to get noticed, and according to Christabel Pankhurst, it worked. She and Annie “had certainly broken the Press silence on votes for women.”[1]

She also referred to stories that pressmen actually got together and agreed amongst themselves that they would ignore women’s suffrage, adding that these “rumours were false or else the agreements broke down”.[2] But after 1905 she said, referring to a meeting she and her mother had had with the representative of an unidentified newspaper, “Never again was the cause ignored by that or any other newspaper”. Mrs Pankhurst reiterated in 1909 that the WSPU had “broken down the press boycott”.[3]

In 1909 Frederick Pethick Lawrence wrote an article in Votes for Women entitled 'Is There a Press Boycott of Woman Suffrage?'[4] He concluded that there was no boycott in the London Press, and he challenged the rumour that editors and owners deliberately sought to sabotage the suffrage movement. Oddly, given the WSPU line that militancy was intended to gain attention, he then claimed that the issue was not that there was a boycott, but that the press preferred militancy to meetings. Militancy sold newspapers; reports of speeches did not, with the result that people were given the impression that militancy was all that the suffragettes did. Even the London press, he complained, ignored the “educational side” of the WSPU’s work. It was a somewhat disingenuous protest, but having made it, there was a clear solution: anyone who wanted to know the facts should buy the WSPU newspaper, Votes for Women (The Suffragette from 1912).

On the one hand, then, the issue seemed to be that the press boycott of the women’s suffrage movement was ended (thanks to militancy), but the press was not reporting it in an appropriate manner (because of militancy). As if this was not contradictory enough, the WSPU continued to raise the spectre of the press boycott throughout the campaign. There were frequent complaints about unreported meetings, such as the Albert Hall meeting on 23 March 1911 when Australian suffragist Vida Goldstein addressed an audience of 10,000, which received very little attention in the press.[5] In addition, newspapers failed to report the brutal treatment meted out to women at deputations and on other occasions, and misrepresented what the women had done or said. Worse still, they refused to publish WSPU letters or statements sent with the aim of setting the record straight. In 1910, the WSPU was enraged when The Times would not publish Hertha Ayrton’s  statement about deputations on 18 November (Black Friday) and 22 November, when she had been assaulted by the police.[6]

Mrs Pankhurst even went so far as to blame the press for the delay in women obtaining the vote. Had they “taken up our question as they have taken up men’s questions…the women of this country would have won their Parliamentary vote long ago”.[7]

So convinced was the WSPU about the existence of the Press Boycott, they frequently gave their supporters advice on how to overcome it. “The truth about the movement,” said Frederick Pethick Lawrence, “was to be found only in Votes for Women”[8], though the editors of the NUWSS’s Common Cause or the Women’s Freedom League’s The Vote might have begged to differ. As well as buying the WSPU newspaper as he suggested, other ways members could help to “circumvent” the press boycott included finding subscribers or selling the paper in the street.[9]

Later historians have echoed the WSPU’s perception of a boycott, bordering on conspiracy. Clare Wright states in You Daughters of Freedom that when Vida Goldstein came to England in 1911, “For months now, the general press had been maintaining a boycott of any news or information related to suffrage activities”.[10] She also suggests that the press boycott was one of the challenges the organisers of the 1911 Women’s Coronation Procession faced when they were attempting to publicise the procession: “with the continuing press boycott ruling out mainstream media coverage, grass-roots PR was the only option”.[11] But was the attitude of the press any worse in 1911 than it had been previously?

I was so intrigued by the question that I decided to try and take a closer look at the press coverage of the militant campaign. But how was I going to identify press articles about the suffragettes given all the possible search terms I could use (vote, votes for women, WSPU, Women’s Social and Political Union, franchise, suffrage…)? In the end I decided to use the search term “Pankhurst” on the grounds that while it would by no means reveal all the available articles about the WSPU, it would at least produce some figures I could use for comparison, especially given that the Pankhurst name was the one most likely to garner such press coverage as there was. A key word here, too, is available: I used the British Newspaper Archive which doesn’t, of course, cover every single local British newspaper published over the period.

Consulting the British Newspaper Archive then, I used the search term “Pankhurst”, Publication Place – All, and Publication Title – All. I then extracted results for the total number of articles by year, excluding advertisements, family notices and “miscellaneous” articles. I arrived at the total number of articles by adding together the categories “articles” and “illustrated articles”. I then subtracted the articles published in the WSPU’s own newspapers, Votes for Women and The Suffragette. You can see a summary of the figures I came up with below.

I discovered that there was a dip in the number of articles published in 1911 (and 1910), but of course that doesn’t prove that there was a “boycott”. There are other explanations. These were years when there was a truce in WSPU militancy during the negotiations for the Conciliation Bill so, given the press’s predilection for militancy rather than meetings, there was from the media’s point of view little to report. This seems plausible given the spike in coverage from 1912, when militancy was resumed, to the first half of 1914 (which I searched to 12 August 1914, the date that the WSPU ceased to operate as a suffrage organisation with the suspension of  militancy at the start of the First World War), with a huge leap in 1913 when militancy was at its height. It also seemed to me that if the press had truly wanted to stifle the women’s campaign, a boycott during this period would have made most sense by rendering the militant campaign ineffective. It was, after all, a campaign that thrived on publicity.

There’s also a drop from 5700 in 1908 to 3616 in 1909. Boycott – or simply that by 1909 some of the novelty had worn off? The WSPU themselves were aware of the need to constantly introduce new tactics in order to keep the public’s attention. Overall, though, if there was a boycott it wasn't a very effective one as there were articles published in every year between 1908 and 1914.

I also used the same search term – Pankhurst – to look at coverage in The Times (which was not sympathetic to the WSPU) and The Guardian (which was). As I’d expected, The Guardian search produced a higher total for the period (1187 to The Times’s 813). Both newspapers show a “dip” in 1911, with The Times search coming up with only 47 articles. In fact, the pattern of highs and lows seems broadly the same across the three searches, with 1908 being fairly high, 1909 showing a drop, the Conciliation Bill years 1910 and 1911 showing a greater drop, and the militant years 1912-1914 showing a spike, with the maximum coverage in 1913.

You can see these figures below. 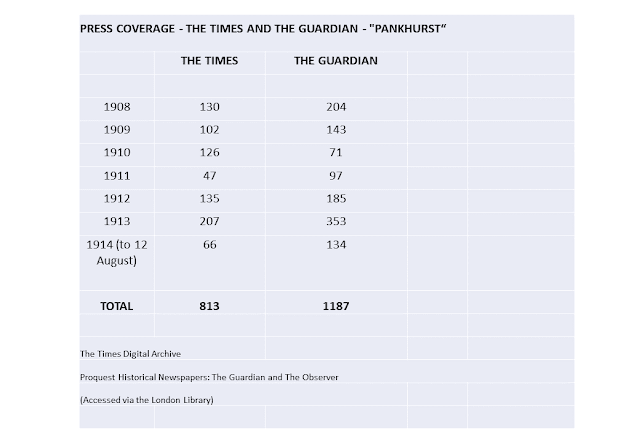 So was there a press boycott or not? Perhaps it’s not so much a question of quantity as quality. The issue was not so much that the press ignored the suffrage movement, though they gave it much less attention than they gave men’s issues, but that they misrepresented and misreported it. The American suffragist Mary Winsor visited London in 1913 and 1914 to investigate the militant British suffrage movement. She concluded that the opposition of the English newspapers was “one of the greatest obstacles which the suffrage movement has encountered”.[12]

She found that the insular English press had failed to “grasp the significance and extent of the [world-wide] woman suffrage movement”. English papers were “men’s newspapers, got up by men for men, and largely devoted to party politics. The space given to women’s affairs is meagre, and the general tone towards women is hasty and contemptuous, or else of a deliberate and unctuous silliness”. Journalists failed to report major meetings and events, over-emphasised militancy without explaining the issues that lay behind it, ignored not only the law-abiding campaign but the “vast constitutional propaganda of the militants themselves”, failed to report police violence against women protesters, exaggerated public opposition to the campaign, and “embroidered” accounts of suffragette violence. Winsor even accused some newspapers of inciting mob violence – “lynch law” – against women.

I stress, of course, that I don’t claim what I’ve done is definitive by any means. One limited search does not make for cast-iron conclusions! And when it comes to interpreting the results, there are numerous other factors to take into account, eg dates of elections and by elections, the extent of local suffrage activity and press coverage. To really understand what was going on it would be necessary to analyse the articles in more detail to see what was being covered and when, and to extend the years searched. And that’s without even beginning to look at how the press treated the non-militant suffrage campaign.

Still, for all its shortcomings it was an interesting exercise and threw up lots of questions I’d love to explore further. But to truly do justice to the subject, much more serious and time-consuming research is needed – and I simply don’t have the time at the moment to take it any further. So this is really just a very tentative – possibly even a false! – start. One thing that does seem clear is that the WSPU’s claim that there was a press boycott could certainly stand further investigation.

Available from Amazon and other retailers.
For more information see https://www.lucienneboyce.com/the-bristol-suffragettes/

Sign up to my Newsletter and receive a free e-copy of The Road to Representation: Essays on the Women's Suffrage Campaign