The Female Writer's Apology; Or, Then and Now

A few of our authors have come together to share a variety of articles and items of interest on their blogs for your enjoyment. There are some lovely giveaway prizes, and – to stay in keeping with the Spring and rebirth theme at this time of year – some colourful Easter eggs. Feel free to collect the eggs, and use them where you like. They were drawn by SilverWood author Peter St John who writes the ‘Gang’ series about a boy who was evacuated to a village near Ipswich during WWII. Meet Peter and his characters on the Blog Hop, along with a host of eggcellent SilverWood authors.

To find their blogs follow the links at the bottom of the page. (Links will be live from 17 April 2014.)

And here is my blog...The Female Writer's Apology; Or, Then and Now

In my eighteenth-century thriller, To The Fair Land, Ben Dearlove’s adventures start when he tries to find the anonymous author of a book about a voyage to the South Seas. His first clue to the writer’s identity is the realisation that the book cannot be by a woman because:

“No woman ever launched a volume on the world without apologising for it first. ‘Took up my pen with no thought of publication... Nothing but the necessity to provide for a young family could have induced me to lay this trifle before the public... Beg the reader will look kindly upon it for all its demerits.’ ” (Chapter 5).

Why did this detail matter to me?

Partly, of course, because it reflects a view that Ben would very likely have held: women couldn’t write serious books. It also says something about the eighteenth-century literary scene. It was common practice for writers to preface their books with a modest disclaimer about its literary worth, which was usually a sly way of proclaiming its merits: “it’s not very good, but...”

Sheridan’s preface to The Rivals is a long apology for the defects of an earlier draft of the play, which he says fully deserved criticism. Few writers, he adds, “do not wish to palliate the faults which they acknowledge” and “second their confession of its deficiencies, by whatever plea seems least disgraceful to their ability” – his plea is inexperience. Even so, Sheridan has enough confidence to refer to his “ability” and to defend his work from “little puny critics” who are “spleen-swoln”.

William Godwin, in an introduction to the 1831 edition of St Leon, originally published in 1799, refers to the “diffidence” which kept him from attempting another novel after the publication of Caleb Williams in 1794. Evidently, he got over it. In his preface to Tom Jones, Henry Fielding asks the reader “that he will not expect to find perfection in this work;...and...that he will excuse some parts of it, if they fall short of that little merit which may appear in others”. At the same time, had he “been sensible of any great demerit in the work” he would not have sought patronage for it.

Even when mocking the parade of false modesty, writers were rarely able to stray from it. In his memoirs, bookseller James Lackington, ostensibly rejecting the custom of pointing out his “weaknesses and imperfections”, self-deprecatingly would consider himself “amply rewarded” if the reader deems his memoir “not the worst” ever written. For all that, he claims there is merit in his work. It shows what can be achieved by “a persevering habit of industry, and an upright conscientious demeanour in trade”.

Samuel Richardson’s own trumpet-blowing in Pamela – “he thinks any apology for it unnecessary” – seems almost refreshing by comparison. Almost.

There was one thing the men never apologised for, and that was their gender. When a woman took up her pen she had to come up with a good excuse for trespassing on male territory. There was nothing frivolous about this, even if the excuses were often thin. A common one was the need to earn a living. Elizabeth Inchbald in A Simple Story says she was driven to write by “Necessity! – thou, who art the instigator of so many bad authors and actors”. Charlotte Smith in her preface to her radical novel Desmond referred to the “affairs of my family” which forced her to write for money (her estranged husband claimed her earnings, as he was legally entitled to do), and she also confronts the criticism that “women...have no business with politics”.

The ultimate apology a woman could make was anonymity. Of course, many men published anonymously, for example to avoid prosecution, or to protect their professional status – Henry Fielding published some works anonymously because he was a magistrate. However, the male writer had only to hide his name, not his gender.

Sarah Scott’s Millenium Hall was written by “A Gentleman on his Travels”. Frances Burney published her first novel Evelina in secret, sparking off an excited debate about whether the writer was a man or a woman. Revealing their gender was a serious undertaking for women writers. When Clara Reeve published a revised edition of The Old English Baron it was only after a great deal of persuasion and “with extreme reluctance” that she could “suffer my name to appear in the title page”.

Sarah Fielding’s authorship of The Adventures of David Simple was only made known when the rumour got about that her brother Henry had written the book and he felt the need to defend himself from accusations of hypocrisy (he had vowed never to publish anonymously). The second edition revealed Sarah’s authorship, but it was Henry who wrote the preface which focuses on – Henry.

However, the main reason the detail mattered to me is that women writers are still concealing their gender. J K Rowling published her Harry Potter books using initials on the advice of publishers who said boys would not read the books if they knew a woman wrote them. She went on to publish her detective novels under a man’s name (there’s a long tradition for this – the Brontes, George Eliot...). The use of initials by women authors is common in fantasy, science fiction and thrillers. Manda Scott changed to M C Scott because, she says, most men do not buy books by women. It’s harder for women to get their books reviewed too – in March 2013 a Guardian survey found that 8.7% of books reviewed in the London Review of Books were by women; 26.1% in the New Statesmen; and 34.1% in the Guardian. The figures are no better in America, as the VIDA project’s annual count shows.

Historical fiction is as much about the present as the past. It reflects our own situation and preoccupations, and for me that’s what makes it relevant. It’s a way of asking: how much has changed? As Ben Dearlove’s remarks suggest, for women writers it sometimes seems not very much.

The Gender Balance of UK Literary Culture, The Guardian, 8 June 2013

Everyone who leaves a comment will be entered in a prize draw to win a signed copy of To The Fair Land.  (Comment form at bottom of page.) 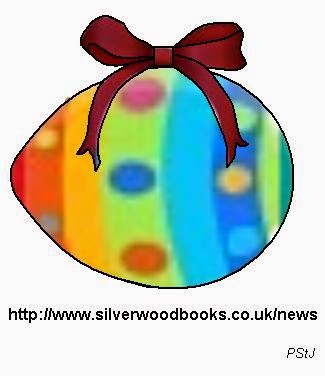 There are six in all scattered throughout the Blog Hop. Collect them all and feel free to use them on your own Blog or Facebook – or wherever you like!


And now hop along to more Easter blogs by following these links:-

Helen Hollick  Let us Talk of Many Things  Fictional Reality.

Anna Belfrage Step inside...   Is Freezing in a Garret a Prerequisite?