Earlier this month, Gallows Wake dropped anchor at Scriblerus as part of a blog tour. In a guest blog, Helen considered the question: What makes a good hero, a good heroine or even a good (bad?) villain? (Link below.) This is my review of this gripping adventure...

Gallows Wake is the sixth of the Sea Witch voyages. Set early in the seventeenth century, they follow the adventures of adventurer and one-time pirate, Jesamiah Acorne, and the white witch, Tiola Oldstagh. They’re an exciting blend of historical fact, fantasy, and swash buckling, with a strong dash of romance thrown in. 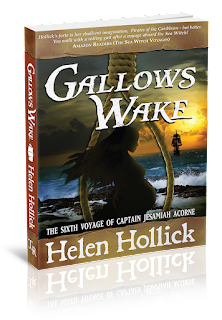 Gallows Wake is a story with its origins in the past: a woman hung for a crime she did not commit; old enmities snapping at Jesamiah’s heels; the aftermath of a raid by Barbary pirates and Jesamiah’s daring rescue mission. The writer has a keen sense of the nearness of the past: Tiola in Lisbon is aware of “the presence of the past lingering within the streets...the past tumbling, higgle-piggle, with the present”.

Multiple dangers loom in that present. There are many who want Jesamiah dead: the Spanish, whose navy threatens to besiege Gibraltar where Jesamiah has called to see to repairs to his ship, Sea Witch; a British naval captain; a villainous government agent. Jesamiah and Tiola, who is pregnant, have faced danger together before, but this time they are separated when Tiola has to sail for England and what they both believe is safety. Jesamiah, meanwhile, is manoeuvred into serving on a British Navy ship, with all the perils that brings.

But never fear if you’ve not yet read the earlier books: there’s enough back story to keep you up to date with the rapid twists and turns and double crosses, and enough action to keep you fully engaged with the unfolding story. Ambushes, sea battles, assassinations…

The dialogue brings the characters to life, and there are some lively turns of phrase: a publican is “as talkative as a parrot that had been sampling the ale barrels”. The book also includes an author’s note, for readers who like to know how the history and the story relate to one another, and a glossary. I love a good glossary, especially of nautical terms. Words like “swab” and “lubberly” are made to savour!

Gallows Wake is a book about spirit, and not only in the sense that it’s a high-spirited adventure. Tiola, the white witch, hovers on the threshold of an unseen world: the “Beyond”, which “to the dead…was a new existence”; Tethys, spirit-goddess of the sea; the unseen Malevolents. But what chiefly stands out for me are the spirits of Jesamiah and Tiola themselves, he with his love of freedom and adventure, she with her magic (Craft) and knowledge that transcends this life, and indeed many lives. Together they create something wild, passionate and more than a little dangerous in this enticing story. Gallows Wake is a great read.

Find out more about Helen and her books:-