This month I'm looking at two novels, one set in a very ordinary world about "a very ordinary" life, and the other in a fantasy world about far-from-ordinary people. Both Rosalind Murray's The Happy Tree and Naomi Novik's Uprooted weave their own kind of spell...

My first reaction to this novel was disappointment. It seemed like just another of those “golden summers before the First World War” books in which posh children have happy childhoods in a lovely big English house only to find sorrow, misery, grief, heart break etc etc when they grow up. All the ingredients of the idyll are there: the house, Yearsly, an eighteenth century mansion with tennis court, walled garden, rose garden, deer park, pavilion, and ponies. It is staffed by butler, cook, nurse, governess and gardeners, all long-serving and contented with their lot (“the servants never changed at Yearsly”). It is inhabited by a dreamy woman who seems to have nothing to do but garden (Delia); her distant but decent husband (John); and her floppy-haired and, of course, talented and handsome sons (Guy and Hugo). In the mix too are the public schools (Winchester), Oxford Colleges, teas, picnics, bathing parties, and dances.

I wouldn’t have minded any of that – in fact I could have quite enjoyed it – if it hadn’t been for the way the prose grated on my nerves. It was too falsely simple: things are “very” this and “very” that. Clauses are linked by “and”, constantly repeated. Criticisms are couched in terms of “silly” or “rather silly”.

And yet…the book began to get under my skin. I got used to the prose style, and was able to appreciate its intimacy and immediacy: “only tonight I am seeing them for the first time…”, “I think”, “I suppose”, “It is like what I have heard”, “somebody told me”.

From the first page, there are hints that something else lies beneath the surface gloss. The narrator, Helen Woodruffe, grown up, married, with children of her own now, opens her story with a description of her current home. Here “all the colours are wrong, all the shapes are ugly”. The contrast with Yearsly becomes all too apparent, possibly all too unsubtly obvious, as the book unfolds. But that contrast is deceptively glib. What really struck me was the remark that Helen wouldn’t have minded her present surroundings so much except “somehow I have come awake tonight, for a bit”.

In those words lurks a profound grief, a grief so deep that Helen can only survive by sleep-walking through her life. They evoke the agony of those brief awakenings, the haste to return to slumber. And they set the tone for the novel: elegiac, sorrowful, anguished. The anguish is quiet, just as the narrator insists that the events of her life are ordinary: “And really, so little has happened to me; my life has been a very ordinary one”.

That is why in the end I found the book so moving. The experiences Helen describes – the happy childhood, the unhappy marriage, the death of someone she loves, the feeling that youth has gone – are “true of thousands of people”. But that’s what makes is all so terrible. All that loss, all that sorrow, all that disappointment, the everydayness of suffering – which Murray describes so well it was almost unbearable to read.

All that is left to her, Helen thinks, is “to hold out till the end”. Her tragedy is that she is stuck in the past: she sees change but she can’t accept or make sense of it. “You are a priceless crowd!” chides Guy’s bride towards the end of the book, “You live in a world of your own, all long ago, and out of date, and things as they used to be.”

The book opens the night before Helen’s fortieth birthday; when it closes it is her birthday. Change is happening, whether she recognises it or not. Perhaps, I comforted myself as I finished the novel, there’s a chance for her yet, a chance for all who grieve, to do more than “hold out till the end”. She has already woken up once: it could happen again.

Agnieszka, a woodcutter’s daughter, is brought up in a village on the edge of a wood animated by a malevolent and powerful entity. Dreadful monsters lurk in the wood, and from time to time they emerge to destroy people and obliterate villages. All that protects the realm from being completely overwhelmed is the vigilance of the wizard known as the Dragon who lives in proud isolation in his watch tower. His only companion is a maiden from one of the surrounding villages who is taken to serve him in a manner which is all the more terrifying in prospect because no one knows exactly what that service involves. In time-honoured fairy-tale fashion, the women never return to their homes.

When, to everyone’s surprise, the Dragon chooses Agnieszka as his next servant, it isn’t immediately clear why. She doesn’t seem particularly talented, beautiful or clever, and when he tries to teach her the most simple spells, she struggles to learn anything. But Agnieszka has other strengths: courage, strength and a strong sense of herself and her roots. 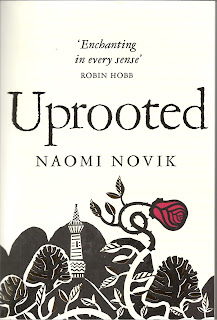 It’s soon clear that the Wizard isn’t the only one with power, and she’s as much of a shock to his world view as he is to hers. There’s a Beauty and the Beast air to the relationship, although the Dragon, in spite of the name the villagers give him, isn’t a beast, at least not to look at. But he isn’t human either; he’s an immortal wizard, and he lives up to the beast sobriquet by his habit of taking a maiden every ten years.

But the novel has a much broader sweep: there’s more going on than the battle of the Wood vs Humans. A missing queen, power struggles around the throne, and war with a neighbouring state provide mystery, suspense, and a great deal of bloodshed.

Witchcraft, wizards, battles, beasts, a strong heroine, a mysterious hero, court machinations, and brooding over it all the dark Wood: there’s a lot to take in. And none of it is told in quite the way you might expect. It isn’t a soppy love story where the couple start off hating one another but it turns out they were in love all along, and for me (a reader allergic to soppy love stories) the relationship between Agnieszka and the Dragon was one of the most interesting elements. Nor is it a straightforward good (humans) v evil (the Wood). Nothing is quite so simple: people wake up to the dreadful mistakes they’ve made, and maybe the Wood isn’t what it seems either. And it’s full of twists and turns and how-are-they-going-to-get-out-of-that-situations that make it a real page turner.

I thoroughly enjoyed Uprooted. It’s a fantastic read, and I’ll definitely be looking out for more books by Naomi Novik. 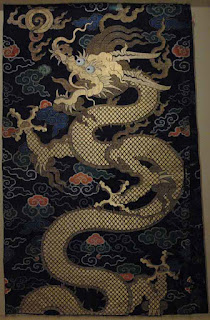 An army battalion in France: 'A new army battalion on the march in France (near Merville)', 5 August 1915, The Girdwood Collection, British Library on Flickr, No Known Copyright Restrictions.