My reading highlights this month are a look back at Greenham Common Women's Peace Camp in Greenham Common:Women at the Wire, and fantastic adventures in thirteenth-century China in Jin Yong's A Hero Born.

“This book is dedicated to all our oppressors. Your time is up!”

This year is the fortieth anniversary of the setting up of Greenham Common Women’s Peace Camp, so this month I read Greenham Common: Women at the Wire.

The camp was started in September 1981 by Women for Life on Earth, a Welsh group who had walked to Greenham from Cardiff to protest about the siting of Cruise missiles on the airbase. Thirty six women, four men and a few children set off, and by the time they arrived four more people had joined them. A few days and protests later they decided to make their presence at the base permanent. 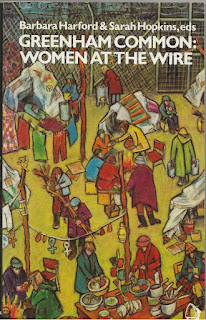 In February 1982 the peace camp became a women-only space. From that space, women encircled the base, blockaded the gates, invaded the base (on one occasion dressed as teddy bears), occupied the air traffic control tower, pinned toys and ribbons to the fence, and cut the fence. The missiles had all gone by 1991 and the air base closed in 1993, but the peace camp remained until 2000. In that time, thousands of women from Britain and around the world went to the camp to visit or stay for short or long periods. In December 1982 the first mass demonstration drew 30,000 women to “Embrace the Base”.


Published in 1984, the book tells the story of the Peace Camp’s early years in a mixture of editorial input, for example introductory and narrative material; and writing from over fifty women who lived at the Camp. It emphasises how the Camp was not planned but grew out of group decisions. It also describes how it challenged the structures underpinning the patriarchal, militarised society that has made the existence of nuclear weapons possible. The challenges were encapsuled in the desire to establish “a different lifestyle” based on a commitment to working without hierarchies, leaders or spokeswomen; in sharing chores regardless of what were usually ‘men’s jobs’ and ‘women’s jobs’; and non-violence. The camp was also a radical challenge to accepted ideas about what women should or shouldn’t do: “why aren’t they at home looking after their families?” balanced against women’s claim to public and political spaces.

Inevitably, some voices are absent, as the editors acknowledge: “lots of our experiences and feelings [are] untold”. In addition, the writing that is included has gone through a process of selection and editing. Nevertheless, the range of opinions and viewpoints gives some idea of how these at times difficult divergences could lead to anger, frustration, and hurt. These sometimes painful encounters confronted questions that still demand answers. What counts as non-violent action, is it effective, is it possible? Is it possible to exist without hierarchies? (You could argue that the book, with its editor/edited divide, is itself a hierarchy.) Is a hierarchy such a bad thing anyway? How can you organise effective protests if everyone is free to do their own thing without some sort of direction?

And how far can you include everyone’s voice and experience, particularly in a decision-making process, when the taking of one decision necessarily excludes the others? This struck me particularly in the description of the decision to make the camp women-only, the upshot of which was that some women left. Is that, I wondered, how groups must always survive, by the exclusion, or self-exclusion, of dissenting voices?

Greenham Common: Women at the Wire captures a point in time when the Peace Camp was still finding its way (and perhaps it always was). It’s a thought-provoking book, and one I found impossible not to engage with. I felt at times frustrated, baffled, irritated, inspired, moved to laugher, and moved to tears. Above all, I enjoyed reading the women’s stories and appreciated their openness about their thoughts and feelings.

In 2018 the Scary Little Girls feminist theatre hub and The Heroine Collective interviewed over 100 women who were at Greenham. You can listen to some of the interviews (more will be uploaded over the next few months) on the Greenham Common Women Everywhere website.

Jin Yong is the pen name of Louis Cha Leung-yung, whose novels sell in their millions amongst Chinese-speaking readers. They were first published in Hong Kong in the 1950s. His books have inspired films, TV series and games, and his Legends of the Condor Heroes series is now appearing in English translation. Having read the first one, A Hero Born, I say three huge cheers for it!

I know next to nothing about the wuxia genre – the centuries-old literature of the martial arts heroes of ancient China with its stories of warriors, villains, heroes, sorcerers, and lovers. At the same time I love the films Crouching Tiger, Hidden Dragon and Hero (two of the British Film Institute’s Ten Great Wuxia Films) and House of Flying Daggers. So this is certainly a genre that appeals to me and when I heard about A Hero Born I was interested in trying it. 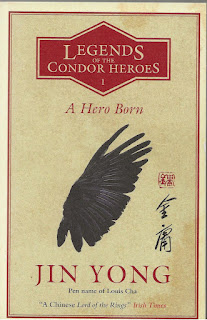 The novel is set in the thirteenth century, and I have to admit that when I first started I found it pretty daunting. For a start, there was trying to get into my head the unfamiliar, to me, background – helpfully supplied in the translator’s prologue – and characters. The Song Empire is at war with the Jin Empire, and in the middle are the khans of the Mongolian steppes including Temujin, later Genghis Khan, with their shifting inter-tribal alliances.

On top of that each antagonist has its own complement of princes, generals, officials and followers. There’s a list of characters at the front of the book which is six pages long – and it only includes the ones who appear in this volume. And that’s not counting the martial arts masters – the Five Greats, the Quanzhen Taoist Sect, the Seven Freaks of the South. And when I read that there are twelve – twelve! – books in the series I thought, I’ll never read twelve books of this!

But how could I resist a book about people called the Seven Freaks of the South? And with nasty villains called Twice Foul Dark Winds who move at supernatural speed in “a long shadow…skimming across the sand”? And where the fight moves have names like Search the Sea, Behead the Dragon, and Lightning Ignites the Sky?

And let’s be frank, it was hard going at first. I thought I’d never get into it and that A Hero Born would be my first and last foray into the Legends of the Condor Heroes. And yet something told me that if I stuck with it, this could be a book for me. I began to sort out the people and the politics (the character list came into its own there), to get into the rhythm of the language (obviously I can’t comment on the translation in terms of its faithfulness or otherwise to the original Chinese), to enjoy the opening out of a new world, and learning about its codes and moralities.

More importantly, I started to warm to the hero, Guo Jing. One of the things I particularly like about him is the fact that he isn’t the best or the brightest. He’s a bit slow on the uptake, and his teachers struggle to impart their skills to him – though this may be because they aren’t going about it the right way as he does improve when another master teaches him. But he’s brave and loyal and never stops trying, and I suspect that his modest awareness of his limitations will develop into a strength as his adventures unfold.

Now I can’t wait to read the next books in the series, A Bond Undone and A Snake Lies Waiting. One more book has already been translated, and the rest are to follow. If I enjoy them as much as A Hero Born, it could be that twelve books won’t be enough by a long way.