I’ve just read Square Haunting: Five Women, Freedom and London Between the Wars by Francesca Wade. I loved this book. It’s about a group of women whose lives and work I find really inspiring though I don’t know much about some of them, and nothing at all about one (HD). The other women are Dorothy L Sayers (I’m a huge fan), Virginia Woolf, Eileen Power and Jane Ellen Harrison.


I’m moved and encouraged by their passion for and dedication to their work. I love the way they just kept going through all the discouragements and disappointments. I’m fascinated by their lives between the wars. I’m infuriated by the attitudes they faced – which still ring oh-too-true today. I eagerly devour these stories of women who were not just seeking but creating their own space.

Of course, space here doesn’t just mean their physical space, but how and where they chose to live is a huge part of it. Hence the book’s brilliant focus on place, on a place: Mecklenburgh Square in London. The book gives a vivid sense of how they lived, in their public and also their private spaces. As I read, one aspect struck me: that not one of the women assumed responsibility for cleaning or maintaining that space. They all relied on other women to do it for them.


Most of them had been brought up in homes where they had servants. If they went to university to study or work all cleaning, care and maintenance was done for them. So was the cooking, though some of the women did cook occasionally, but only because, like Virginia Woolf, they enjoyed doing it – and there was someone else to do the washing up. When they set up private homes for themselves, they employed housekeepers, cleaners and cooks. If there were children, they had others to help with the child care – HD had her friend Bryher and paid nannies; Dorothy L Sayers sent her child to live with a cousin in Oxford.


I don’t think it would have occurred to them that any other arrangement was possible. Dorothy L Sayers rented just one room in Mecklenburgh Square – but she employed a cleaner. Virginia Woolf, who had always lived with servants, did begin to question the system, but I had the impression that she was more interested in how it affected her than the people she employed. She hated the lack of privacy, and she felt uncomfortable about being a socialist and feminist who relied on working class women to do the dirty work. Her solution? Move the servants out. And that’s what the Woolfs did when they lived at Monk’s House in Sussex: they bought a couple of cottages in the village for their gardener and cook-housekeeper. Peace at last – with all the housework done and meals prepared!


I’m not criticising these women for employing cleaners. In fact, I think it’s great that the women they employed were paid to do work that countless other women have been conned into doing for nothing for centuries. I can’t help thinking, though, how much easier it was for them to leave the cleaning to someone else when they’d never been brought up to do it. But then neither had their brothers or fathers or uncles. I’ve yet to read a biography of Charles Dickens or D H Lawrence which even mentions that they didn’t do the dusting. 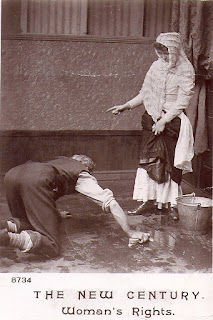 The world turned upside down?

Drearily, it’s an issue that is still with us. Only a month ago Caitlin Moran had to defend her decision to employ a cleaner. As she pointed out, “Martin Amis has never been asked if he loads his own dishwasher.” It is not, Moran insists, a woman’s issue, or a feminist issue: “Housework is the concern of all.”


The rest of the world, though, hasn’t caught up with that now (for more on this see the links below), and it hadn’t caught up with it then, when the women in this group biography were living and working in Mecklenburgh Square. Unlike Moran, I think housework is a feminist issue while women and domesticity remain linked. Consequently, these five women’s rejection or subversion of domesticity is closely connected with their feminism and freedom.


But while I love the way that they achieved so much and set such inspiring examples, I can’t help thinking of all the women who never stood a chance of achieving what they did, who were never even able to try. The women whose schooling consisted of sitting in huge classes in dowdy schools where they spent hours doing needlework and cookery while the boys learned maths and science. The women who had to leave school, such as it was, at fourteen or fifteen and go to work. The women who might have attempted to teach themselves, but who didn’t have lots of books and even if they did, didn’t have the time, energy or a quiet place to read them. The women who didn’t have parents who could afford to send them to university, or pay monthly allowances so they could live an “independent” life until the royalty cheques started to arrive. The women who were the odd ones out in their families and social circles because, just like Dorothy L Sayers and the others, they didn’t want to settle for the narrow sphere life had mapped out for them because of their gender, race, class, where they were born.


I wonder if one of those women ever picked up a book to dust it and paused with it in her hand, flicking over the pages, longing to be able to make all the wonders it contained her own. I wonder if when she approached one of those cluttered desks she ever dreamed of herself sitting in the chair, every now and again gazing out of the Georgian window across the Square, with the pen in her own hand poised over sheets of paper covered with her thoughts, her ideas. I wonder if she ever put down her dustpan and brush for a moment when she was outside a study door and listened to the buzz of conversation inside, feeling its energy, its excitement, its fellowship. I wonder if when she went in to collect the used cups and glasses her heart turned over with longing to be one of those wonderful, trailblazing women talking, laughing, smoking, drinking, reading.

‘Women’s domestic burden just got heavier with the coronavirus’, The Guardian, 16 March 2020