It’s International Women’s Day today and I’ve been thinking about the women who inspired me. On Friday I was at the unveiling of a Blue Plaque to one very inspirational woman – Bristol-born suffragette Emmeline Pethick Lawrence. She was brought up in Weston-super-Mare and the Plaque was placed on her childhood home, Lewisham House, 80 Bristol Road Lower, Weston-super-Mare.

Afterwards, I spoke at a panel event which was part of Weston-super-Mare Literature Festival. Writer and explorer Jacki Hill-Murphy told us all about some remarkable women travellers, including Isabella Bird whose biography she’s just written. Biographer Kathryn Atherton, author of Suffragette Planners and Plotters: The Pankhurst/Pethick-Lawrence Story, shared Emmeline Pethick Lawrence’s remarkable story with us.

In 1792, Mary Wollstonecraft wrote: “I may excite laughter, by dropping an hint, which I mean to pursue, some future time, for I really think that women ought to have representatives, instead of being arbitrarily governed without having any direct share allowed them in the deliberations of government.”[1]

Today Weston-Super-Mare has recognised Emmeline Pethick Lawrence, one of the women who turned Mary Wollstonecraft’s hint into a reality. Mary Wollstonecraft was one of the first women who dared to imagine the possibility of women having a say in government. It’s no wonder, then, that she is, for me, an Inspirational Woman. But that’s not the only, or even the main reason, why she is so important to me. 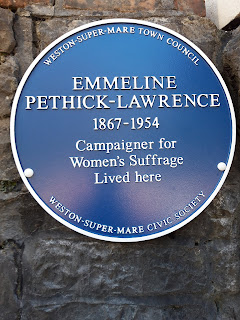 Mary Wollstonecraft was an author, a radical, and a campaigner for women’s rights. In 1792 she published one of the earliest manifestos for gender equality – A Vindication of the Rights of Woman. But she was more than a theorist: she insisted on living her life on her own terms and if society wouldn’t give her freedom, then she’d claim it for herself.

At an early age she decided she’d support herself by her own work in spite of the limited options available to women: companion, teacher, governess, writer. She tried them all until she finally settled into her vocation as a writer.

But not for Mary the pigeon-holing into mere “romance” that was considered suitable for a woman’s pen. No, when Mary Wollstonecraft wrote a novel she put into it unpalatable realities: domestic violence; child neglect; rape; women condemned to low paid, low status drudgery; men who got women pregnant and then deserted them; women who’d been in prison; women driven into prostitution. All the things that women weren’t supposed to know, that they certainly weren’t supposed to write about.

She was an advocate of women’s right to education. Unlike her brother, she and her sisters didn’t get much at all in the way of schooling. Since women were expected to marry, what education they had was driven by the need to make them attractive to husbands. But Mary thought women should be allowed to develop their potential. Their education shouldn’t be all about making them docile, meek, and biddable, teaching them to hide their true feelings, teaching them not to rock the boat. Women are still taught not to rock the boat: brought up to believe that if we’re assertive, we’ll only make ourselves look aggressive; if we’re ambitious, we’re just being selfish; if we’re angry, we’re too emotional.

She was an unmarried mother who proudly adored her baby, her beloved “Fannikins”, her “cherub”, her “sweet” child. And she feared for her daughter’s future too: “I feel more than a mother’s fondness and anxiety,” she wrote, “when I reflect on the dependent and oppressed state of her sex”.

Even when she eventually found love and married William Godwin, she refused to accept the wifely role that society would have forced on her. Together they tried to forge a new kind of marriage, a marriage of equals. She didn’t give up her work or become his secretary. She carried on writing, and she never for a moment let anyone think her work was less important than his.

Of course, it didn’t always work: it was still Mary who worried about the laundry. I don’t think we can pretend we’ve come much further than the Godwins in that!

She was a deeply religious woman who accepted no creeds: her religion was based on a direct, personal experience of the Divine. In every aspect of her life, Mary Wollstonecraft was a woman who believed nothing at second hand. She had a kind of truth, a kind of integrity that came from deep within her own heart, her own mind, her own experiences. Above all she had the courage to express those truths.

And so patriarchy tried to silence her. She was accused of going where women were not allowed to go, of trespassing on the male domain of serious literature and serious politics and serious business. She had a “masculine” mind, said the critics, and it wasn’t a compliment. Her books were dismissed as indecent, irreligious and immoral. She was an “Amazonian terror”, a fright to look at. She was a whore. Her very death proved what an unnatural creature she was. She died after eleven terrible days of suffering following the birth of her second daughter, Mary. And she deserved it, trolled her critics: she’d rebelled against the role allotted to women, and she’d paid a woman’s price for it.

Because trolls are nothing new!

But Mary Wollstonecraft wouldn’t be silenced. She insisted that women had a right to be heard.

A violent, abusive father couldn’t silence her. She didn’t fear him, she despised him. She allowed herself anger, when what was expected of wives and daughters was submission.

Great men couldn’t silence her. Her first major publishing success was A Vindication of the Rights of Men, a defence of the French Revolution against the criticism of Edmund Burke. What was she thinking? Here was the great Edmund Burke – and there was Mary, a female author who had yet to achieve very much. No matter: she had an opinion, and she was going to voice it.

When her lover, Gilbert Imlay, deserted her, leaving her with a daughter to bring up, she was heartbroken – and she didn’t see why she should let him get away with it. In letter after letter she demanded an explanation. What is it you want? How can you not care for your child? Why didn’t you come to meet me when you said you would? How can you choose another woman over me? She followed him to Le Havre, to London, demanding answers; she made him look at his daughter. He said her questions were “extraordinary and unnecessary”. She disagreed – and she kept asking them.

She didn’t believe that women had to sit in silence while great men pontificated. When Godwin went to a dinner party to meet Tom Paine, the influential author of Rights of Man, he was disappointed to find that it was Mary who did all the talking. Paine, never a great conversationalist at the best of times, hardly said a word, while Mary argued with Godwin. “I heard her”,  Godwin wrote, “when I wished to hear Paine”.

What’s always fascinated me about that story is the way Mary gets the blame. No one ever wonders why Paine made so little effort to talk to people who had come expressly to meet him. And if Mary was arguing with William, isn’t it also true that William was arguing with Mary, and so he must at least share the responsibility for what happened?

In fairness to Godwin, he did admit that he was partly to blame. But that’s not usually how the story’s been retold. Rather, we are left with the image of a noisy, garrulous Mary Wollstonecraft, butting in where she’s not wanted, interrupting the real conversation, the men’s conversation, with her trivial remarks.

Mary Wollstonecraft couldn’t have been an easy person at times. Gilbert Imlay’s heart must have sunk when another envelope with her hand writing appeared at his breakfast table. She often made a mess of her personal life: the end of the affair dragged on for months, and reading her letters you just want to say, ‘oh for god’s sake, leave him, he’s not good enough for you!’ She even made two attempts to kill herself because of it.

She loathed commerce and the obsession with money making which she thought had ruined Imlay, but when he asked her to go to Scandinavia on a business trip for him, she agreed. She handled the business side of things very well, too.

She believed in equality and loathed hierarchies of class and wealth. Yet she was pleased when she was recognised – by the softness of her hands – as a lady, and her appeal for women’s education was made on behalf of middle class women. But it was Mary Wollstonecraft who gave a voice to a working class woman in her novel, The Wrongs of Woman.

She was critical of the institution of marriage, but she took Gilbert Imlay’s name. Then, when she found out she was pregnant with Godwin’s child, she married him. In fact, when she took the name Mrs Imlay, she and Gilbert were living in Paris and if she hadn’t agreed to pose as his wife, she might have been arrested as an enemy alien: Imlay was American and his nationality protected her. Besides, as far as she was concerned, they were married. True love didn’t need empty ceremonies.

As for marrying Godwin, well, we’ve seen that she’d already been left with one child to bring up and how she feared for that child’s future. Maybe she felt it was time to find a bit of security.

So she wasn’t always consistent. She wasn’t afraid to change her mind – and nor was she afraid to speak it. Her voice rings out in her writing: strong and clear and honest. She had dark moods, and she could be irritating, opinionated, self-pitying, didactic. But she was also charming, ambitious, witty, loving, honest, vulnerable.

And above all, whatever she wanted to say, she never stopped claiming her right – the right of all women – to say it.  And that’s why for me Mary Wollstonecraft is such an Inspirational Woman.

Do you have an Inspirational Woman? If you’d like to share her story and why she’s so inspirational, please leave a comment below.
[1] Mary Wollstonecraft, A Vindication of the Rights of Woman, 1792 (London: Penguin Classics, 2004)  p 228.
Posted by Lucienne Boyce at 2:50 PM