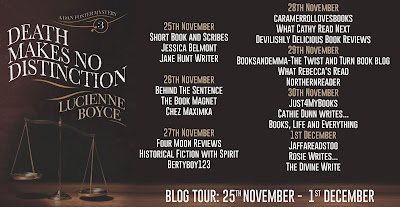 Death Makes No Distinction is on a blog tour this week. The novel is the third in the Dan Foster Mystery series, which follows the fortunes and cases of Bow Street Runner and amateur pugilist, Dan Foster.

When Dan’s old rival, John Townsend, requests Dan’s help to investigate the murder of a former mistress of the Prince of Wales, Dan is ordered to abandon the case he was working on – the murder of a beggar woman, found savagely murdered in the outhouse of a London tavern. Dan won’t let the death of an unknown woman go unavenged, and is determined to get to the bottom of both murders.

But as his enquiries take him into both the richest and the foulest places in London, and Townsend’s real reason for requesting his help gradually becomes clear, Dan is forced to face a shocking new reality when the people he loves are targeted by a shadowy and merciless adversary…

Find out more by joining the Death Makes No Distinction Blog Tour! (Follow the links to read the full reviews.)

JessicaBelmont -
"The pacing is great and I didn’t want to put the book down until it was finished."


"An absorbing walk on the dark side of Georgian London, with a likeable detective and heinous crimes."

TheBook Magnet -
"A superb historical murder mystery with a down to earth and realistic protagonist."

FourMoon Reviews -
"Lucienne does an amazing job at bringing her characters to life."

HistoricalFiction With Spirit -
"An addictive slice of historical crime."

"If the story isn’t going to revolve around characters who are just moderns in fancy dress, it’s necessary to try to understand the attitudes, values and beliefs of a particular era. But how do I go about discovering mindset?" - a guest blog musing on the challenges of reflecting "mindset" in historical fiction.

RosieWrites… -
"It's great to see the gritty reality of the times brought so vividly to life."

TheDivine Write -
"This is the first Dan Foster book I have read, although it won't be the last."

The blog tour has been organised by Rachel’s Random Resources 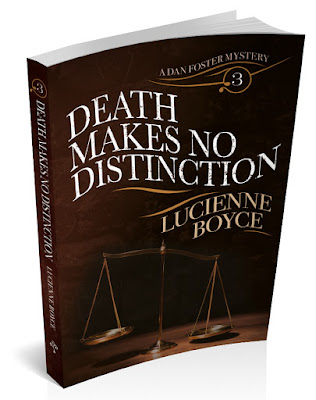 Available in paperback and ebook
Amazon