"Madder than ever": The Tollemache Family of Batheaston

In 1894 Reverend Clement Reginald Tollemache (1835–1895) moved to The Villa, Batheaston with his wife, Frances Josephine, and three daughters, Mary, Grace and Aethel. The family had been living in Brighton, where the Reverend Tollemache had settled after ministering in India for some years. His daughters were all born in India. In Batheaston, Reverend Tollemache gave ministerial assistance at St John’s and St Catherine’s churches. However, he did not enjoy his new home for long, and died in November 1895.

In 1903 the eldest of the three sisters, Mary, married Bernard Charles Spencer Everett, a canon at St George’s Chapel, Windsor. Grace (1871–1952) and Aethel (1874–1955) remained in Batheaston. Here their lives took an arguably much more exciting turn than that of their sister in the quiet precincts of The Cloisters at Windsor Castle.

In 1907 Aethel Tollemache and her friend and neighbour Mary Blathwayt of Eagle House, Batheaston went to a meeting in the Victoria Rooms, Bristol. They heard speeches by Christabel Pankhurst, Emmeline Pethick Lawrence and Annie Kenney of the Women’s Social and Political Union. Mary and Aethel were converted to the cause and joined the WSPU. Aethel’s mother and sister were not far behind Aethel in declaring their allegiance to the militant suffrage movement.

They were soon engaged in a round of fund raising, attending and organising meetings and events in London, Bristol and Bath. In 1909 the Tollemaches lent their garden for a talk by the author Laurence Housman, an active supporter of votes for women. The Blathwayts had opened their home to suffragettes who needed a place to stay when visiting the West Country, or somewhere to recuperate after their release from prison. The Tollemaches often entertained suffragette leaders such as Mrs Pankhurst and Annie Kenney to tea when they were staying at Eagle House. Grace and Aethel were both honorary secretaries of the Bath Branch of the WSPU, which had a shop at 12 Walcot Street.

On 18 June 1910, Grace, Aethel and Mary Blathwayt marched behind the Bath banner in a great suffrage procession in London. The Tollemache sisters were joined by their sister Mary and brother-in-law, the Reverend Everett. In the Albert Hall they listened to speeches by Mrs Pankhurst, Emmeline Pethick Lawrence, Lord Lytton, Christabel Pankhurst and Annie Kenney.

Meanwhile, Mrs Tollemache adopted another form of protest: tax resistance, based on the principle ‘No vote, no tax’. In 1911 she refused to pay her taxes; some of her furniture was seized by the bailiffs and auctioned at the White Hart in Batheaston. Her property was purchased by sympathisers and returned to her. In 1912 she repeated her protest. This time her silver was seized and auctioned at the White Hart. The sale of one piece was sufficient to cover her costs, and this was duly returned to her. Outside, suffragettes demonstrated with banners and speeches. In 1913 she again withheld her taxes and similar scenes took place. Mary Blathwayt, Aethel, Grace and other suffragettes, together with members of the Tax Resistance League, attended the auction. At the start of the bidding, Grace announced that she protested against the sale. Afterwards, their sister Mary chaired a suffrage meeting in the street; her husband was also present. During the auction in 1914, suffragettes once again marched through Batheaston to show their support for their tax-resisting colleague.

In 1911 suffrage campaigners engaged in the Census Resistance campaign. All over the country, women raised the cry “If we don’t count, we refuse to be counted”, and took measures to avoid filling in their census forms. Many spent the night away from their homes so that the census enumerators could not include them in the returns. Grace and Aethel joined other women from Bath and Bristol at 12 Lansdown Crescent, a house rented for the purpose by Bath organiser Mrs Mansel. The women passed the night pleasantly with music, recitations, and a lecture on clairvoyance. The Tollemaches were a musical family and the sisters joined in the entertainment: Grace played the violin with Aethel accompanying her on piano.

By 1911 Aethel was also taking part in more extreme militancy. In November she joined a WSPU deputation to the House of Commons and was amongst the two hundred women arrested after she broke a window at the National Liberal Club. She was sentenced to fourteen days’ imprisonment. The following year it was Grace’s turn to break windows. She took part in the well-orchestrated, major window breaking action in London on 1 and 4 March 1912, when women smashed windows in Knightsbridge, Oxford Street, on the Strand, Regent Street, and in Whitehall. Grace took part in the second day of the protest, and was one of the hundred and twenty women who were arrested after she broke government office windows. She was sentenced to two months with hard labour. In prison she went on hunger strike, but was not forcibly fed.

In August 1912, the Tollemache sisters drove around Bath in a wagonette covered with suffragette posters, which stopped at local flower shows, gymkhanas and sporting events. That year too saw the disagreement about militant tactics between Mrs Pankhurst and Christabel Pankhurst and Frederick and Emmeline Pethick Lawrence which led to the dismissal of the Pethick Lawrences from the WSPU. Grace and Aethel signed a declaration of loyalty to Mrs Pankhurst. Sent from the Bath WSPU, it addressed Mrs Pankhurst as “the Queen of Women. We, the members of the Bath Branch of the WSPU, wish to convey to you our unswerving loyalty to your person, and our grateful appreciation of your leadership of the Militant Campaign in the Women’s Movement”.

But by now their friends the Blathwayts, who had never engaged in militancy, had become thoroughly disenchanted with the suffragette tactics. Mary’s mother, Mrs Emily Blathwayt, had already resigned from the WSPU in 1909 following an assault on the Prime Minister, Herbert Henry Asquith, by three suffragettes. As suffragette militancy escalated to include arson and vandalism, Mrs Blathwayt advised Grace Tollemache that the Blathwayts could no longer offer hospitality to Mrs Pankhurst and other militants. The Tollemaches took over their role as hosts of suffragette visitors. Mary Blathwayt resigned from the WSPU in 1913.
Relations with the Blathwayts were less cordial than they had been. Mrs Blathwayt, relieved that her daughter had withdrawn from the WSPU at last, noted in her diary that she felt ashamed to be connected with the WSPU. When an empty house at Lansdown, near Bath, was targeted by arson in 1913, she immediately suspected the Tollemaches. Suspicion also fell on the Tollemaches when a house at Westwood in Wiltshire was burned following a meeting of the Agriculture Minister, Walter Runciman, in Trowbridge which had been interrupted by a number of suffragettes. Grace and Aethel were amongst the protesters. Mrs Blathwayt had called Aethel “madder than ever” after her arrest in 1911, and in Batheaston generally, Aethel was known as “the mad one”.

Suffragists had been subjected to violence from the very early days, but now the atmosphere became increasingly nasty. Both militant and non-militant campaigners were often attacked by hostile crowds. At a meeting in Trowbridge in April 1913 the police had to hide the Tollemache sisters and other suffragettes in the police cells to protect them from a violent crowd.

Mob violence, imprisonment, and the disapproval of their friends and neighbours did not deter the sisters. Aethel took part in a deputation to the House of Commons on 28 January 1913 and was sentenced to seven days in prison for window breaking. Grace and Aethel were both arrested during the WSPU demonstration outside Buckingham Palace on 21 May 1914. Grace was sentenced to one day in prison for obstruction, but Aethel’s sentence was longer. In Holloway, Aethel went on hunger and thirst strike.

On 27 July 1914 Mrs Tollemache, Grace, Aethel and others were at Weston Police Court to support Bath school teacher Gertrude Francis, who had set fire to hay ricks at Englishcombe near Bath. Gertrude, who, had been on hunger strike, was granted bail. She was driven away with Mrs Tollemache in a supporter’s car.

In what was probably the last militant act associated with the Tollemaches, one or both of the sisters protested during the enthronement of the new Bishop of Bristol, Dr George Nickson, in Bristol Cathedral on 1 July 1914. When she started to speak about women’s suffrage she was gagged and thrown out. According to reports, the disturbance went largely unnoticed.

Mrs Pankhurst suspended suffragette militancy at the start of the First World War and channelled the efforts of the WSPU into supporting the war. The WSPU was eventually renamed the Women’s Party, and played little part in the agitation for the 1918 Representation of the People Act which enfranchised women over thirty who met a property qualification. The Tollemaches also did their bit in war time, turning their garden over to growing food which they sold at a market stall. They also encouraged women in Twerton to cultivate land near their cottages.

Aethel became a pacifist and joined Sylvia Pankhurst’s East London Federation of Suffragettes which was based in the East End of London. Socialist, suffragist and pacifist Sylvia campaigned tirelessly against the war. Aethel and a colleague were arrested in Leytonstone while collecting signatures for a peace memorial. They were released with a warning that if they persisted they would be prosecuted under the Defence of the Realm Act.

Their mother, Frances Tollemache, died in 1925. Grace and Aethel continued to be involved in causes such as the anti-vivisection movement. They were both vegetarians, and in prison when not on hunger strike had lived on bread, butter, milk and eggs. In the 1930s they turned part of The Villa into a hostel for hikers. In February 1934 they gave lunch to a party of Welsh hunger marchers who were protesting against unemployment when they passed through Batheaston. They also offered their home for Labour Party meetings. In addition, they continued their musical pursuits, and were often to be found giving recitals and performances in and around Bath. 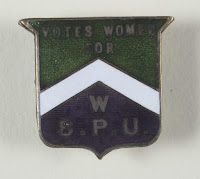 Available in paperback at: