I hope you’ve not been missing out on the Discovering Diamonds Christmas blogs – but if you have you’re in for a treat when you catch up!

This “entertaining interlude for Christmas by a variety of authors” organised by Helen Hollick on the Discovering Diamonds blog is a bulging Christmas stocking full of tiny treats. With stories that take you on journeys around the world and into different eras, it’s a bit like a tin of assorted chocolates with something for everyone.

Follow the links in the titles if you want to read one of these stories.

The first Diamond Tale, a short story set in 1960s Friern Barnet. Who remembers Jet Harris, bass guitarist of The Shadows? A lovely tale on the power of a song to evoke memories. 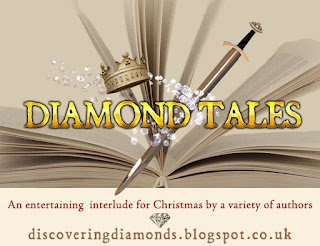 When Ex-Lovers Have Their Uses by Helen Hollick

A rearranged excerpt from the third Sea Witch Voyage, Bring It Close, by Helen Hollick in which that devilishly wicked pirate Jesamiah Acorne calls on an ex-lover to help him gain access to the Governor of Virginia’s house – where he is definitely not welcome.

Two lovers arrange a clandestine meeting on a cold, snowy night in this beautifully realised tale – but will their plans succeed?

The Lost Diamond by Denise Barnes

That dreadful moment when you look down at your finger – and it’s bare!

A Soul Above Diamonds by Elizabeth Jane Corbett

The power of Welsh legend and storytelling in a story about the great Welsh poet Taliesin.

The Curious Case of the Disappearing Diamond by Julia Brannan

A story set in London in 1744 based on fascinating characters from The Jacobite Chronicles and the hunt for a stolen gem.

Sometimes It Happens by Pauline Barclay

To London’s East End now and the hard struggle for existence for many in contemporary Britain – and the hope a lottery ticket brings.

Hearts, Home and a Precious Stone by Annie Whitehead

Through Anglo-Saxon Britain tracing the fate of a mysterious stone known as a Sunstone.

Excerpts from Edward, Con Extraordinaire and Sirocco, Storm over Land and Sea by Inge H Borg

Two treats today following the adventures of a plausible con man with his eye on a string of diamond-clasped pearls. Only problem – they’re still around the owner’s neck.

Excerpt from The Empress Emerald by J G Harlond

In London 1918, we discover the lure of diamonds – forged a hundred million years ago and polished to make men richer – or poorer.

Diamonds in the Desert by Charlene Newcomb

An excerpt from Men of the Cross, in which King Richard weighs up his chances of defeating Saladin.

Murder in Silks by Lucienne Boyce

Finally, Diamond Tales also includes an exclusive preview of the next Dan Foster Mystery, which I’m currently working on.

In spring 1798, Bow Street Runner Dan Foster is called to his second murder case in a week – one he’s been told to prioritise because of the victim’s high-society connections. As if that isn’t irritating enough, the lead officer in the case is Principal Officer John Townsend – and he and Dan are not exactly on friendly terms...

So make a morning coffee date from now until Christmas with Diamond Tales!