The gout sticks to me: two previously unknown letters by William Morris


Back in 2011, I did a blog about one of my most treasured possessions:  three volumes of the eighth, four-volume edition of William Morris’s The Earthly Paradise (Ellis and White , 1880). Apart from being a volume short, they are quite ordinary books and they’re not in particularly good condition. The reason I treasure them is that glued inside them are two hand-written letters by one of my heroes, William Morris.


In that earlier blog, I wondered who had gone to the trouble of pasting in the letters, as well as a newspaper cutting and a slip of paper presenting the books to a Mr Faunthorpe. “Clearly Morris meant something to our scrap collector. Were [Morris’s letters] addressed to him? Why else would he be in possession of them? But then how did he know Morris?”


Last year I took the books into the William Morris Society and they were so interested in these previously unknown Morris letters they suggested that I write an article about them for the Society’s Newsletter. So I decided to see what I could find out about our cutting-and-pasting Mr Faunthorpe. The results of my researches were published in the Newsletter in Autumn 2013. Part of the article is reproduced below, and the second part will be published here next week.


First, though, a recap of the Morris letters. The first letter written by Morris, pasted into Volume 1, reads:-


Thanks for your note; the gout sticks to me so that I am still unable to make any appointment, but I will come on the very first opportunity. Yours faithfully William Morris. 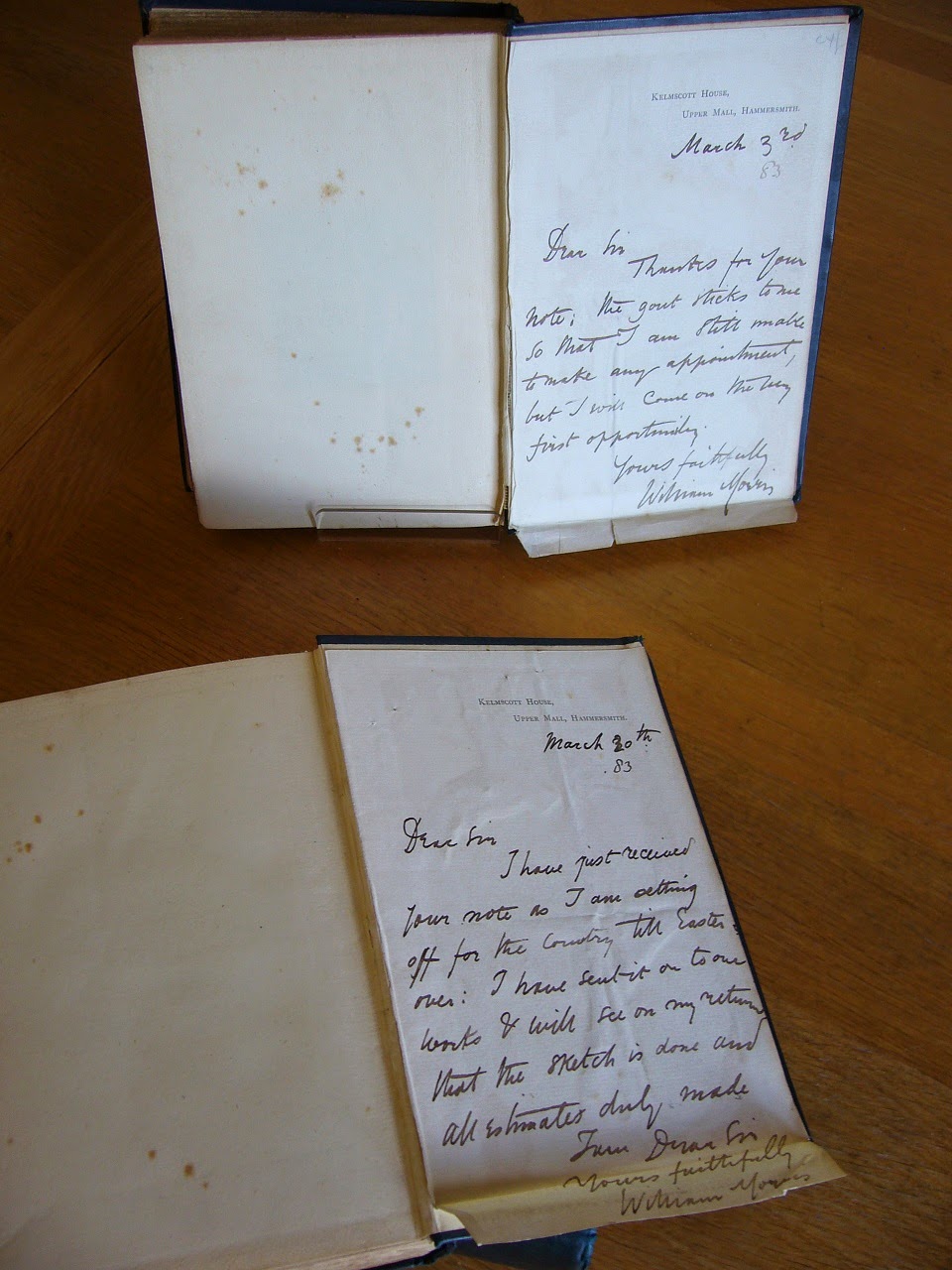 
I have just received your note as I am setting off for the country till Easter is over: I have sent it on to our works & will see on my return that the sketch is done and all estimates duly made. I am Dear Sir Yours Faithfully William Morris”


Both letters are on letter paper with the printed address “Kelmscott House, Upper Mall, Hammersmith” in the top right hand corner. They have been awkwardly folded and badly trimmed to make them fit inside the books, and some of the lettering in the note of March 20 1883 has been cut off.


A newspaper biography of William Morris, who “lives, with his wife and two daughters, in a pleasant house near the Thames at Hammersmith”,  has also been glued into the front of Book I. The article goes on to reassure the reader that, “The socialism of his later days has scarcely alienated any of his older friends”. It is signed The Prompter and – more careless work from our gluer – the date of the cutting and the title of the publication have been removed by the scissors. I have been unable to find out what publication the piece came from. 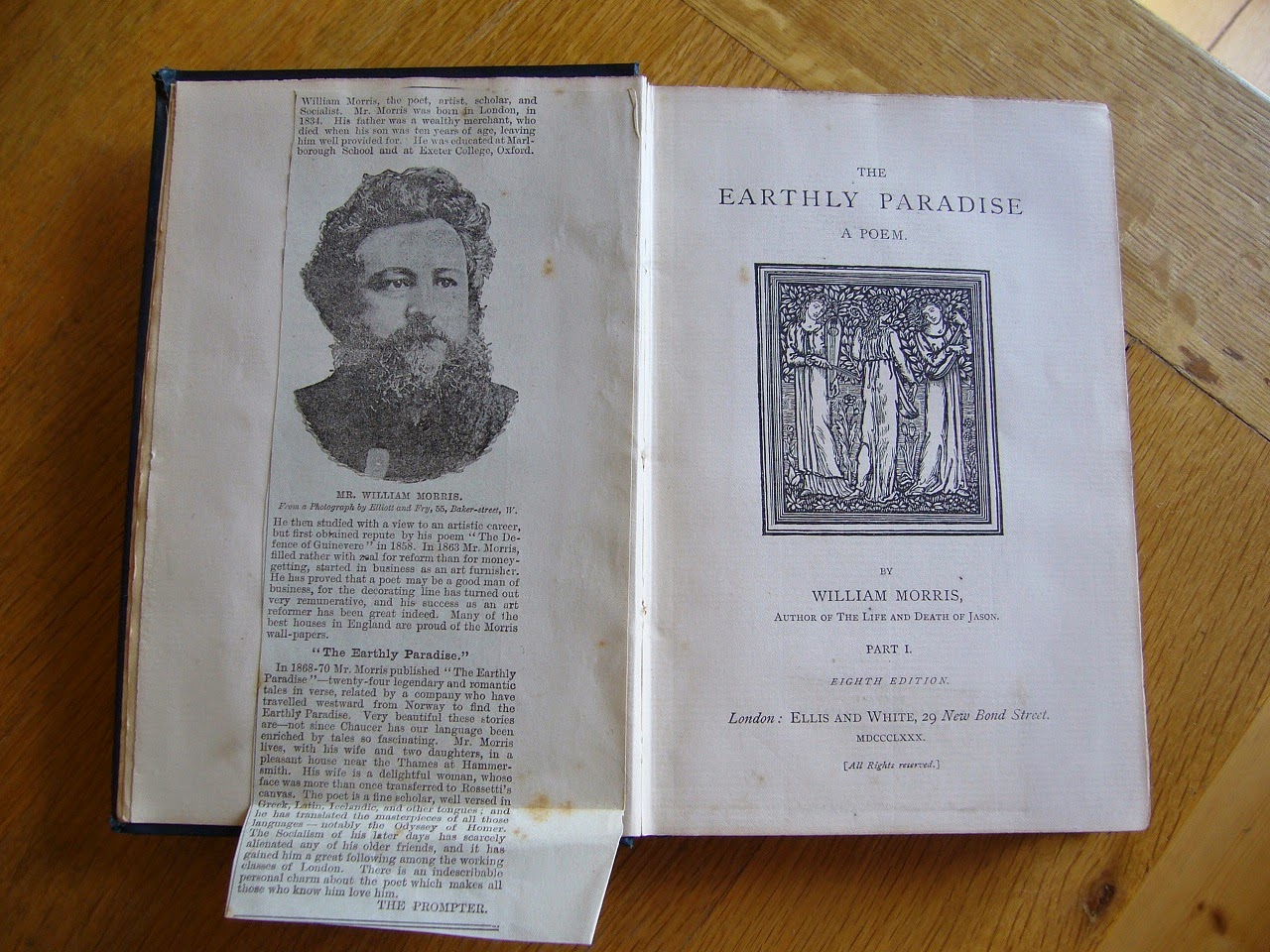 Morris’s letters are inconsequential notes, dashed off by a man in a hurry and relating merely to business matters. They give no clues to the identity of the recipient, nor the circumstances in which they were written. Nothing connects the letters to the note on the slip of paper except that they were written in the same year, 1883. What and where was Whitelands College? Who were Mr Faunthorpe, Kate Stanley and Harriet A Martin? And does anything link them to William Morris?


The puzzle of Whitelands College was easily solved by a quick search on the internet. Now part of the University of Roehampton, the College was founded by the Church of England’s National Society for the Promotion of Education of the Poor in the Principle of the Established Church in 1841 as a teacher training college for women. Whitelands had a number of illustrious benefactors, one of whom was John Ruskin (1819–1900). It was Ruskin who established, in 1881, the May Day festival during which the students elected what he called “the likeablest and the loveablest” of their colleagues as May Queen. Ruskin presented the Queens with a cross designed by Edward Burne Jones (1833–1898), as well as books to give to their hand maidens. The May Day ceremony continues to this day, although now a May Queen or King may be chosen.


The Reverend John Pincher Faunthorpe MA, FRGS (1839–1924) was the principal of Whitelands College. After serving as a pupil teacher at St George’s School in Ramsgate, between 1858 and 1859 he studied at St John’s College in Battersea, the first ever teacher training college (now part of the University of St Mark and St John, Plymouth). He taught at Chester Training College in 1860, and returned to St John’s  as a geography lecturer


in 1861. In 1867 he was appointed vice-principal at St John’s. He was selected as Principal for Whitelands in 1874 from over two hundred applicants, and remained in post until 1907. After his retirement he maintained his connection with Whitelands by acting as College Chaplain.


Faunthorpe is rather unfortunately characterised in Malcolm Cole’s Whitelands College: The History as “dictatorial” and “ungracious”. Whether or not these judgements are fair, he was certainly determined to enhance Whitelands both academically – by introducing new subjects including French, Latin and botany – and architecturally, by establishing and embellishing the College Chapel of Saint Ursula. He turned to John Ruskin for advice about the Chapel.


On 2 February 1883 Ruskin wrote to Burne Jones asking him to design twelve stained glass windows depicting female saints, and stipulating that the glass should be brilliant. Burne Jones consulted William Morris as to how they would achieve the desired effect. Morris wrote to Rev Faunthorpe on 26 February 1883: “My friend Mr Burne-Jones tells me that you wish me to see the chapel at Whitelands College and to consult me on the subject of stained glass windows for them”. (1) Several letters passed before a mutually convenient date for a meeting could be fixed upon. As we see from Morris’s letter of 3 March 1883, one reason for the delay was that Morris was suffering from gout.


Morris also wrote to his daughter May on 3 March 1883 and told her that he had been “leg-fast with gout, which is not at all bad, only obstinate and laming” for four days. (2) He was worried that he would be unable to deliver his lecture in Manchester on 6 March. In the event, the lecture – “Art, Wealth, and Riches” – did go ahead at the Manchester Royal Institution. (3)


Unfortunately, Rev Faunthorpe had to put up with further delay in spite of Ruskin’s reassurance in a letter to him on 14 March 1883 that “Mr Morris’s gout need not hinder him thinking” about the project. (4) As the letter of 20 March 1883 shows, Morris was unable to deal personally with the Whitelands commission as he was about to join his family in the country (which he did on 24 March). By this point Ruskin was growing impatient and wrote to Morris chiding him for the delay: “You bad boy, why haven’t I any bit of glass yet?” Morris responded by sending Ruskin some patterns and a description of the production process on 15 April 1883. (5)


Faunthorpe did eventually get his windows, which were designed by Burne Jones and executed by Morris at a cost of £70 each. The funds were raised by subscriptions from College students. Morris later designed a reredos for the chapel.


In 1931 the College moved from Chelsea to larger premises in Putney designed by Sir Giles Gilbert Scott. The Morris windows and reredos were incorporated into the new site. Subsequently, in 2005, the stained glass and reredos were re-sited in Parkstead House (formerly Manresa House), the present home of Whitelands College at the University of Roehampton’s fourteen acre site overlooking Richmond Park.


As to how William Morris’s letters and the other documents came to be pasted into The Earthly Paradise, it was a habit with Faunthorpe to glue newspaper cuttings and notes into his books.


Next week: A grim sense of humour: Kate Stanley and Harriet Martin


1. Letter in collection of Whitelands College Archive, University of Roehampton.