A Continent of Great Extent: Writing To The Fair Land

Some of you may remember Pythagoras and his theorem from maths lessons at school – and if like me you weren’t keen on maths, then I’m sure he didn’t endear himself to you. Pythagoras, who lived in the fifth century BC, had other ideas too. He believed that a great land mass lay in the southern hemisphere – the Great Southern Continent, the Great South Land, or Terra Australis Incognita. It had to exist, he argued, in order to balance the land masses of the north.


For the next 2,000 years, men dreamed of the Great Southern Continent. They drew maps of it and they speculated about the people who lived there. One theory was that the inhabitants would have feet opposite to our own – antipodes. Others thought they had one huge foot and when they were sitting down they were able to raise the foot over their heads to keep the sun off their faces.


Tantalised by tales of the Great Southern Continent, explorers from many nations went looking for it – Dutch, French, Portuguese, and British. In the seventeenth century the Somerset buccaneer William Dampier tried to find it. He ended up on Australia – then called New Holland by the Dutch explorers who got there before him – which he thought a poor place.


In 1764 the British Admiralty sent John Byron – known as Foulweather Jack Byron – to the Pacific but he didn’t find anything. Some people thought he didn’t try very hard. After him went Samuel Wallis in 1766, who confidently reported sighting the continent.


Then in 1768, the Admiralty sent Britain’s most famous navigator: Captain James Cook. Cook’s voyage on the Endeavour lasted three years and he didn’t find the Continent. He undertook a second voyage between 1772 and 1775, and it was on that voyage that he demonstrated, once and for all, that there was no Great Southern Continent. But in 1772 his second voyage had only just begun, and it was still possible to believe that the Continent existed.


It was that point in history that caught my imagination. A time when our world was still largely unknown to us, when charts and maps had huge blank spaces in them or were purely speculative; a time when men undertook epic journeys with nothing but four inches of wood between them and destruction. I wrote To The Fair Land, a thriller set in the eighteenth century which centres on a voyage of discovery to the South Seas.


In the writing, I was also intrigued by the play between what’s “real” in a historical novel and what is not. In the eighteenth century people believed in the Great Southern Continent on no firmer evidence than that a Greek philosopher made it up. They created a land out of nothing more than their imaginations - which is exactly what I wanted to do in To The Fair Land.
At the same time, I wanted to ground the fantasy in historical fact so that I could use the mythical Fair Land as a mirror to the society the voyagers have left behind – an exploitative, unequal, commercial world. Where my voyagers see a peaceful, compassionate utopia, investors see only the opportunity to make more money – at the expense of people and the environment. And that in turn, is a mirror to the society we live in now... 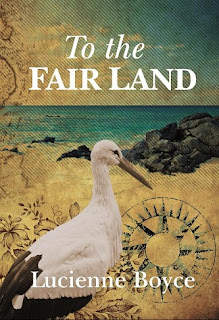 For more information about To The Fair Land, see my website.