Suffragettes and the Old Brown Dog

December 05, 2012
When Mrs Pankhurst spoke at a suffrage meeting in Battersea Town Hall with local suffragette Charlotte Despard, she was puzzled by hecklers' calls for “the old brown dog”. Who was the old brown dog, and what connection did it have with the campaign for female suffrage? 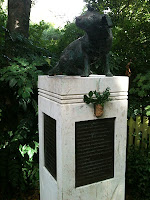 The old brown dog was the victim of vivisection at the hands of Professor William Bayliss (1860–1924) at University College London in 1903. Two female students witnessed  the procedure: Louise Lind-af-Hageby (1878–1963) and Liesa Schartau. Louise Lind-af-Hageby was born in Sweden but settled in England in 1902. She attended Cheltenham Ladies’ College before going on to study medicine with her friend Liesa Schartau.


The women noticed that the dog had already been subjected to one procedure. The law at that time forbade the use of an animal for more than one experiment; it had to be destroyed. They reported the incident to Stephen Coleridge (1854–1936) of the Anti-vivisection Society, who publicly accused Professor Bayliss of breaking the law. Professor Bayliss sued Coleridge for libel, claiming that the dog had been under anaesthetic during the operation and when it was destroyed afterwards. The Professor won substantial damages.


Anti-vivisectionists had lost the case but they were determined not to forget the old brown dog. In 1906 they erected a statue in Battersea in memory of “the Brown Terrier Dog Done to Death in the Laboratories of University College in February, 1903…[and] 232 dogs Vivisected at the same place during the year 1902”. During what became known as the Brown Dog Riots of 1907, medical students from London’s University College and Middlesex Hospital attempted to destroy the statue on 20 November and again on 25 November. On 10 December the London students held a pro-vivisection demonstration in Trafalgar Square where fights broke out between them and working men. They also interrupted anti-vivisection meetings: one hundred students broke furniture, fought and threw smoke bombs at one gathering in Acton on December 1907, and students rioted at another meeting in Battersea on 15 January 1908.


But why attack suffrage meetings? The reason was that many people at the time saw suffragists and anti-vivisectionists as members of the same movement. Indeed, the connections were there for those who wished to make them. Charlotte Despard, who was present at the unveiling of the statue, was Honorary Secretary of the Women’s Social and Political Union. The founder of the British Union for the Abolition of Vivisection, Frances Power Cobbe  (1822–1904), was also a campaigner for women’s rights. Batheaston WSPU supporter Mrs Blathwayt remarked in her diary that many suffragettes were vegetarian. Louise Lind-af-Hageby, who campaigned against vivi-section for the remainder of her life, herself linked the two causes as elements of a new humanitarianism which was opposed to cruelty and oppression.


In fact, not all suffragists were anti-vivisectionists, but the belief that the two campaigns were connected was unshakeable. The students showed the same hostility to suffragettes as they did to anti-vivisectionists. In London they interrupted suffrage meetings with cries of “Down with the old dog”. Their antagonism to the cause of women's suffrage was followed by students elsewhere, including in Bristol where on 3 April 1908 Bristol medical students heckled Mrs Pankhurst at the Victoria Rooms. On 24 November 1909 students rushed the platform in Colston Hall where Annie Kenney and Christabel Pankhurst were speaking. An attempt to wreck the Anti-Vivisection Shop in Queen’s Road was foiled, but in 1913 Bristol students were more successful when they launched a similar attack on the WSPU shop, also in Queen’s Road, looting and burning the premises.


In 1910 the statue of the Old Brown Dog was removed and destroyed to prevent further student rioting. In December 1985 actress Geraldine James unveiled a new brown dog memorial in Battersea Park which had been commissioned by the British Union for the Abolition of Vivisection (BUAV) and the National Anti-vivisection Society. It is this statue (pictured above) you can see today.


Read about the Old Brown Dog Statue at the Friends of Battersea Park website, http://www.batterseapark.org/art/sculpture/brown-dog-statue/
Find out more about the anti-visisection movement at the BUAV website - http://www.buav.org/