Imagine my surprise on opening the book to discover a veritable treasure trove! First of all, the book has a dedication by Esther Knowles. 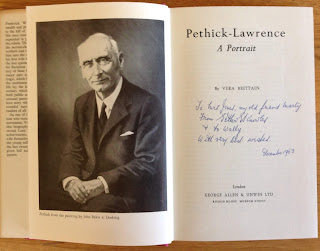 Esther Knowles was one of Frederick Pethick-Lawrence’s two secretaries. As Vera Brittain mentions, Esther first came into contact with the Pethick-Lawrences when she went to stay in the holiday home they had provided for poor London children near their home in Holmwood, Surrey. During the militant campaign, Esther worked at WSPU headquarters. She was the youngest worker there and later said that she found it all quite exciting. During one police raid, she prevented the seizure of WSPU funds by hiding the contents of the cash box in her knickers. She worked in one secret location after another as the WSPU staff moved around to evade the police. After the Pethick-Lawrences left the WSPU, she continued working for Frederick Pethick-Lawrence until he retired in 1959, and remained devoted to him and Emmeline.

But that wasn’t all. Tucked inside the book were the following items.

Memories of Fred and Emmeline Pethick-Lawrence 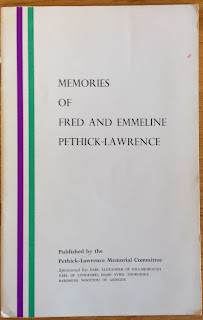 Published in 1963 by the Pethick-Lawrence Memorial Committee, the booklet includes tributes to Frederick Pethick-Lawrence given in the House of Lords by Viscount Hailsham, Viscount Alexander of Hillsborough, Lord Layton, Earl Attlee and Baroness Summerskill, along with a report from The Surrey Advertiser of 11 July 1962 of the memorial ceremonies on 7 July 1962 at Peaslake and Dorking.

On that day the suffragette colours – purple, white and green – flew in Peaslake village, and in the Village Hall Baroness Summerskill unveiled a portrait of Frederick and Emmeline Pethick-Lawrence. Another portrait was unveiled by the Earl of Longford in Pethick-Lawrence House in Dorking, headquarters of the Dorking Labour Party.

Many people subscribed to the Pethick-Lawrence Memorial Appeal Fund, amongst them Margaret Thatcher MP. 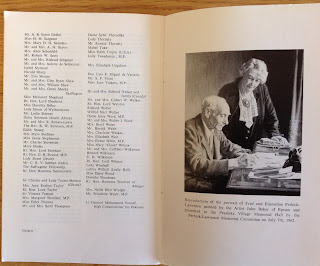 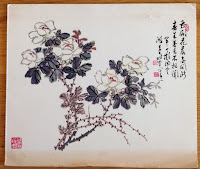 When he was ill, Frederick Pethick-Lawrence requested that this card be sent after his death.

All in all, these items make my copy of Vera Brittain’s biography very special.

You can find out more about the Pethick-Lawrences in my Suffrage Spotlight Archive, opens as a pdf.doc from my website.

Available in paperback at: